You can bet that there is one happy man in Sweden… 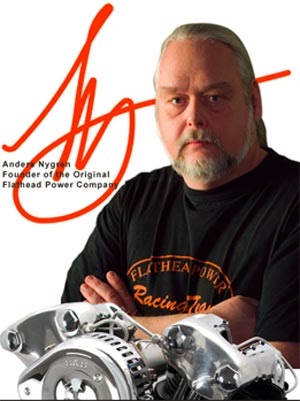 S&S Cycle Inc. announced today that they are transferring ownership of the Flathead Power® brand back to Anders Nygren, the original founder of the Flathead Power company in Sweden free of charge. “We decided to discontinue using Flathead Power as a brand for our vintage product line about a year ago to consolidate our branding under the S&S Cycle name. We still owned the FHP trademark but had no plans to use it, so we decided to give it back to Anders.” says S&S Company president Paul Langley.

When we called Anders to give him the news he was overjoyed. “The happiness when Bruce and Eric called and told me that I could have my old company name back was overwhelming. To be able to use what once was the start of over 20 years of production. The first 12 in Sweden, and the rest in the US. Flathead Power, just a name, means a lot to me and my family, as the next generation is taking over the jug juggling. My son Magnus was born in 1995, Flathead Power started in 1993, so he grew up with this. I can only take my hat off and say: Thank You S&S Cycle and the guys involved!”

Anders Nygren started Flathead Power in Sweden in the early 1990s, mainly to provide impossible to find parts for his own vintage race bikes. His accomplishments as an engine builder and engineer were nothing short of amazing as he, for the most part, single handedly built his fledgling business into an internationally known source for quality reproduction and performance engine parts for vintage Harley-Davidson® motorcycles. Unfortunately, Flathead Power fell victim to a turbulent economy. Anders lost ownership of the name and the company, and Flathead Power was forced out of business. Rather than allow Flathead Power to fade away, S&S Cycle purchased the company name and assets from the new owners in 2007. S&S used the Flathead Power brand for its vintage parts line, but S&S hasn’t forgotten the man who got it all started.

“The parallels between S&S Cycle’s early years and the story of Flathead Power are really quite remarkable.” Says former S&S company president and part owner Sam Scaletta. “We have a lot of respect for Anders, and we feel that returning the brand name to him is just the right thing to do.”

Eric Wangen, S&S project engineer and former product line manager for the Flathead Power line, tells us “Somehow the idea got started in the vintage community that S&S had taken advantage of Anders and cheated him. That’s just not the case. He’ll tell you the same thing. In fact, when he visited S&S back in 2011, we taped an interview with him and he tells the whole story. You can see it on YouTube.”

“Some folks might question the business wisdom of helping a guy who might eventually become a competitor in the vintage market, but sometimes business decisions need to be influenced by what’s right, and what’s fair, rather than just what’s best for the bottom line.” said Paul Devine S&S Vice President of Sales and Marketing.