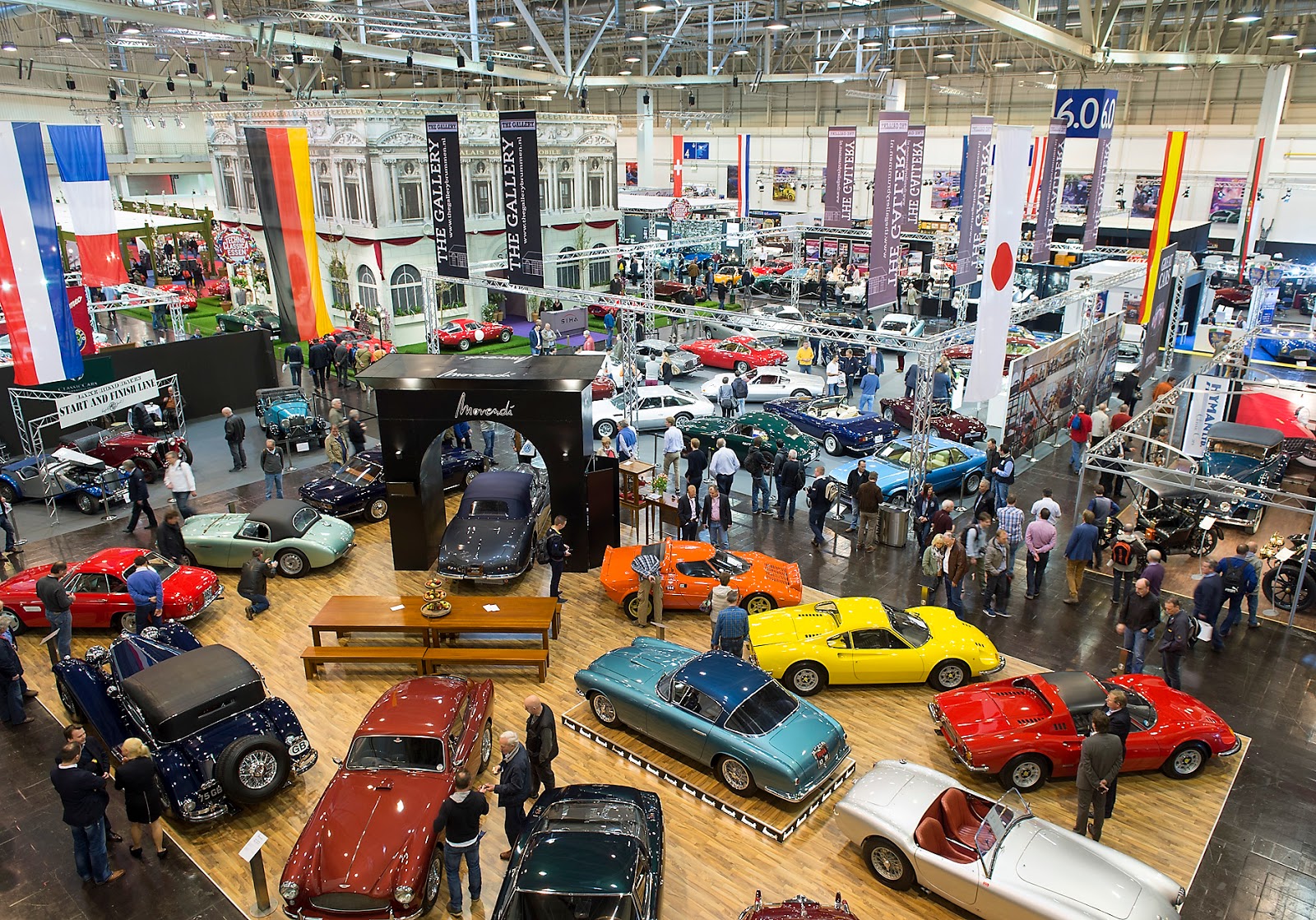 More than 1,250 exhibitors from more than 30 nations have secured the
presentation space of the 27th Techno-Classica Essen 2015 up to the last square
metre: About eight weeks prior to the start of the classic show, all 120,000 square
metres of exhibition space in the 20 halls and on the four open-air grounds of
Messe Essen are occupied. Also in this year, the Techno-Classica Essen 2015 will
be more than just the “World Show for Vintage, Classic & Prestige Automobiles,
Motor Sport, Motorcycles, Spare Parts and Restoration - World Club Meeting”, as
it is described by its subtitle. With more than 220 exhibiting classic clubs and
communities of interest, it is again the world’s largest club meeting of the vintage
and young classic car scene. And the presentations of more than 25 German and
international automobile manufacturers, mostly put on with elaborate effort, make
the Techno-Classica also in this year again the largest history show of the
automobile industry throughout the world. With their presence, the automobile manufacturers demonstrate the importance
they attach to the demonstration of their histories towards the international
audience of the Techno-Classica Essen. They also prove: Only the passion is
sustainable! Some companies have already announced initial information on their
appearance – below in alphabetical order:

. Audi presents 80 years of convertibles and roadsters themed “The Sky is
the Limit“ (“Nach oben offen”) under the sign of the four rings.
. The Autostadt does not only celebrate “15 Years of Autostadt”, but also
presents interesting automobile pairs themed “Beziehungs-Kisten”.

. Bugatti looks back to 10 years of Bugatti Veyron.
. Citroën states as theme for the brand DS: “1955-2015 - 60 Years of DS”.
It is not yet clear which models will be shown by the French manufacturer.
. Ford celebrates the anniversary “50 Years of Ford Transit“ together with
15 Ford clubs and shows commercial and emergency vehicles of the brand.
And for the anniversary “50 Years of Ford GT 40”, the club “Ford GT 40
Freunde Deutschland” is for the first time at the exhibition booth with two
exhibits on display.
. Mercedes-Benz deals with the legendary Mille Miglia win of the 300 SLR in
the year 1955, as well as with the issue of aerodynamics. For this purpose,
the company from Stuttgart presents their exhibits together with all
German Mercedes-Benz classic clubs on their huge exhibition space in hall
1. Special exhibits are the 300 SLR “722” Mille Miglia winner car as well as
for the topic of aerodynamics the modern CLA 45 Shooting Brake, an E
500 (1994), a C 111-III (1978), a W 196 R Formula 1 streamline (1954),
the legendary 540 K streamline automobile (1938), the W 25 record car
(1936) and the monumental Blitzen Benz (1909).
. Opel plans to present “Design” as the main focus at their exhibition space,
in connection with the 50th anniversary of the first Opel concept car, the
Opel Experimental GT.
. Porsche themed their presentation “30 Years of Porsche 959“.
. Rolls-Royce celebrates 90 years of Phantom – and showcases one historic
and one modern exemplar of the brand’s legendary luxury model.
. Skoda reminds us of the company’s establishment 120 years ago,
celebrates 110 years of automobile building and refers to 40 years of
Skoda RS.
. SEAT shows “special prototypes for VIPs“, such as the SEAT “1400 Visitas“
and the “600 Savio” with removable roof – vehicles which have never
been seen on a show in Germany.
. Volkswagen Classic, the history division of Volkswagen, presents on the
occasion of the anniversary “40 Years of Volkswagen Polo” six special
contemporary witnesses, as for example the Polo WRC.
. Volkswagen Nutzfahrzeuge Oldtimer (vintage commercial vehicles
division) deals with the topic “30 Years of Syncro” and shows the T3
Tristar and an object of restoration.
. Volvo shows on their large exhibition area in hall 3, themed “The Bertone
Volvos” the fascinating automobiles created by the Italian designer Bertone
for the Swedish company Volvo. Five Bertone Volvos can be seen in
Essen: The highlight is the 262C Solaire Convertible – one of only five

In the more than 25 years of its existence, the Techno-Classica Essen became the
most important meeting point and largest trading centre of the international classic
scene: More than 2,500 classic cars and collector’s vehicles, young classic cars and
prestige automobiles are on sale. Meanwhile, the specialist dealers just as the more
than 190,000 visitors do not only come from Europe but also from overseas.
Now, also exhibitors from North and South America and even from China
present amongst others, their offerings.

In addition, there are so many restorers, component suppliers, vendors of
automotive literature, spare parts dealers, accessories suppliers, watch and
technology sellers, artists and gallery owners at the Techno-Classica Essen as at no
other classic show in the world. You can see virtually everything around vintage
and young classic cars on the five days of the show. Therefore, the classic scene
will meet again from 15 to 19 April 2015 at the Techno-Classica Essen.

In the centre of the Techno-Classica Essen, the organiser S.I.H.A. presents in hall 6
a fascinating special exhibition with rare and spectacular historic racing cars, which
have one thing in common: They all started at the end of the 1920s for the
legendary Tourist Trophy in Ireland – an automobile street race which was hosted
from 1905 to 1936, and occasionally even counted as sports car world
championship. It is expected that ten classic racing cars of the brands Alfa Romeo,
Alvis, Austin, Bentley, Bugatti, Mercedes-Benz, OM and Riley will bring the
fascination of this spectacular race into the Essen exhibition halls.

The common denominator is the passion for the automobile as a cultural asset. It
is not the market value, which lets the hearts of the vintage car lovers beat faster,
nor is it the financial investment or the expected return of an automobile
investment: It is the fun in the common hobby – collector’s automobiles. The
passion for individual mobility, the awareness for landscape and speed, as well as
the fascination for outstanding design and technical solutions from all eras of
automobile history styling unites all parties involved in the Techno-Classica Essen:
Exhibitors just like guests. And will continue this way in the future – sustainability
par excellence. The leading meeting point and trade centre of the international
classic society will continue to update its lively success story also in the year 2015.
Tradition obliges!