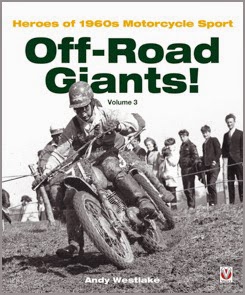 Features
• A unique book featuring the feats of sixteen former scrambles and trials riders
• Contains over 100 previously unpublished photographs
• Many of the former competitors have never had their stories recorded until now
• A trip down memory lane for off-road enthusiasts
• A piece of history that could easily have been lost
• Rider’s personal memories recorded
• A special piece of social history from the 1960s
• An opportunity to view some superb period action photographs
• Face-to-face inteviews with stars of motorcycle scrambles and trials
Description
A unique trip down memory lane for all who can remember the golden days of the 1960s.

This book includes some of the greats of the scrambling world – Dave Bickers, John Banks, Rob Taylor – and others not, perhaps, quite so well known. From the hard-riding Devon farmer John Trible, Gloucester ace Tommy Barker, and Six Days trials star Eric Chilton, to the last ever interview with Olga Kevelos, a true star.

Synopsis
If you can recall the golden era of motorcycle sport then this is undoubtedly the book for you. Featuring sixteen scramblers and one and six days trials stars, this is a must read for all who lined the circuits on muddy Sundays and were glued to their TV sets on Winter afternoons. Author Andy Westlake is regarded as one of the UK's leading classic motorcycle journalists
and this book is the perfect follow-up to his two previous books “Off Road Giants” volumes one and two. In this third volume Andy has once again managed to track down and interview some of the stars of this golden era in off road sport, including the former works Greeves rider and 250cc European champion Dave Bickers, ex works BSA star John Banks, and has even journeyed to Spain to interview Les Archer, the man who lifted the European 500cc crown on his works Norton in the mid ’fifties. A superbly written book brought alive by many excellent period photographs.