MOTO GUZZI ELDORADO
MOTO GUZZI AUDACE
MOTO GUZZI CALIFORNIA 1400 TOURING S.E.
• The fleet of large Moto Guzzi bikes expands with the new Eldorado and Audace, which come alongside two California 1400 (Custom and Touring)
and the new California 1400 Touring S.E.
• Eldorado is the modern and luxurious interpretation of the unforgettable850
that made its fortune in the States.
• Audace is a muscle-bike that emphasises the performance
of the "Made in Mandello" 1400 cc big block.
• The California Touring S.E. gets a graphic makeover with new deflectors
and passenger backrest built into the grab handle. 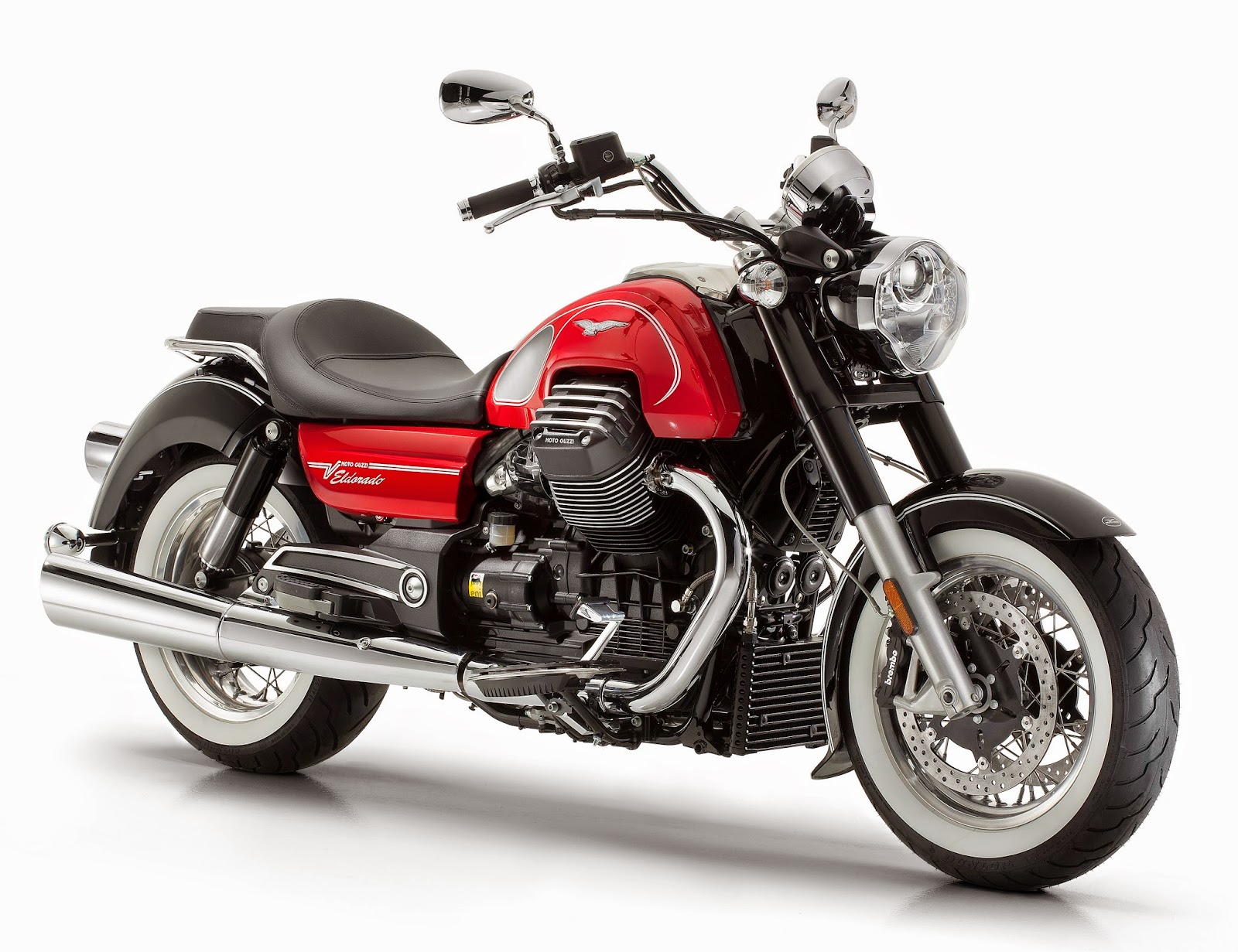 1. MOTO GUZZI ELDORADO: OPERATION FLASHBACK.
“If Roman gods had ridden motorcycles, the Moto Guzzi Eldorado would have been chosen by Bacchus.” This was how Cycle World magazine concluded their test of the luxurious Italian bike, the latest evolution of the 90° V-twin with cardan final drive introduced in the States in the late sixties by the importer Berliner Group. The metaphor effectively highlighted the intoxication experienced on a modern, powerful, luxurious and fast bike, painstakingly studied down to the smallest details and extremely satisfying to ride. Forty years later the experience is repeated in the shape and substance of the new Eldorado.
Staying on the theme of mythology, the new Eldorado leads us to Janus, the two-headed divinity who is the keeper of all passages and transitions. By looking at it one can see clearly how this Moto Guzzi has preserved the personality of its ancestor, drawing it from the past to the future along the path of technological evolution and stylistic continuity.
The flashback effect comes out in the details: the spoke wheels, the fuel tank with chromium sides, the oversize saddle, the rear mudguard with the gem-shaped taillight, the bullhorn handlebar, the passenger grab handle. 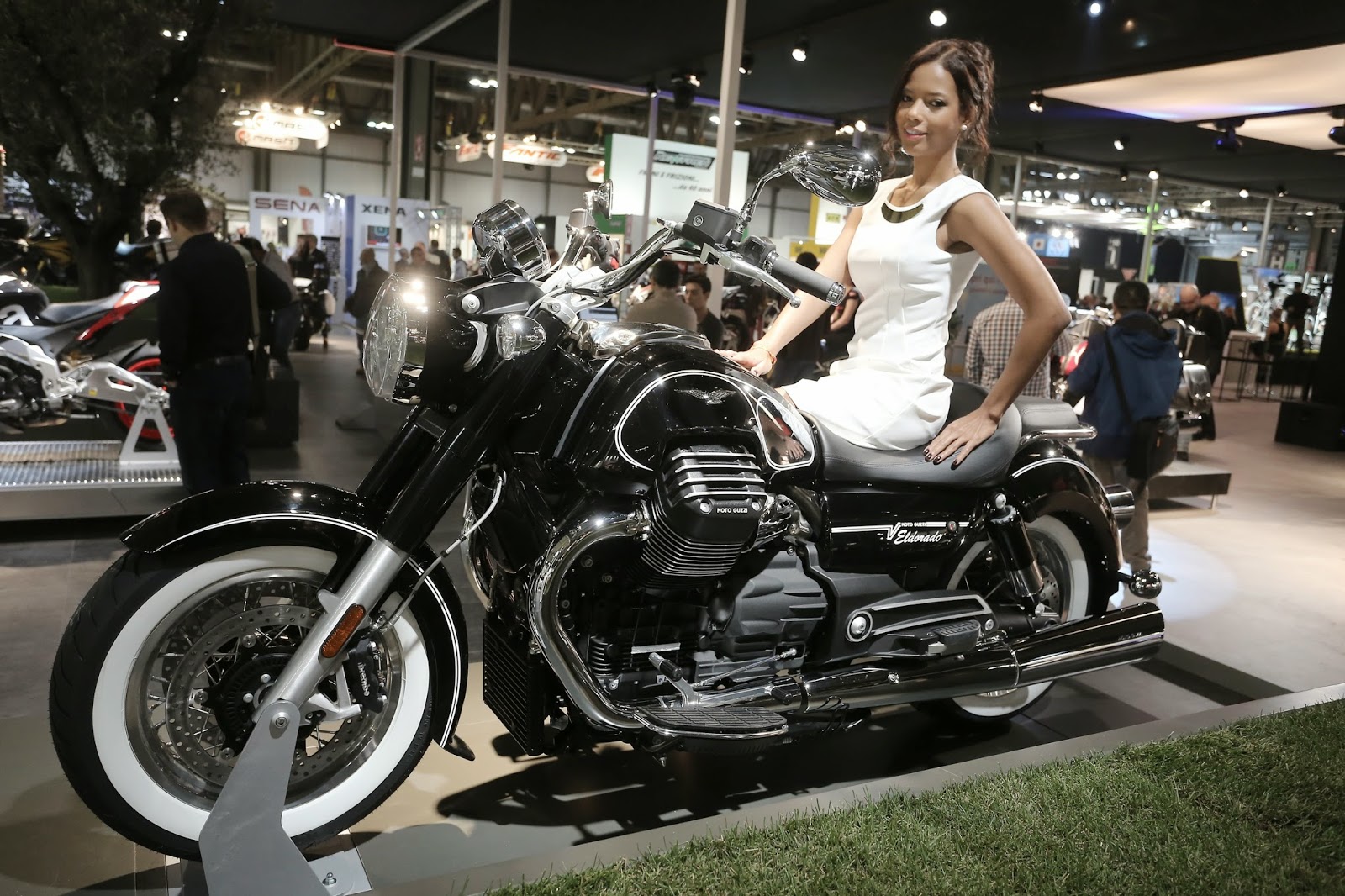 With a lower setup thanks to the new sixteen inch spoke wheels that mount whitewall tyres (130/90 on the front and 180/65 on the rear), attention is drawn to the new wraparound mudguards. The front has a particularly “clean” design which enhances the powerful front end, whereas the rear, on the other hand, is the element that draws the most attention on this ultra elegant Moto Guzzi. Its smooth and generous shape integrates with the new full cover shock absorbers, the gem-shaped rear light cluster and the classic rounded turn indicators.
At the front the Eldorado, like the Touring and Custom models, is also distinguishable by its
original complex surface headlight with polyelliptical light equipped with LED daylight running light (DRL). Speaking of digital technologies, the instrumentation is particularly satisfying, contained in a 150 mm diameter circular panel with the analogue rev counter scale finding its place along the external circumference and a multifunction full-matrix suspended display at the centre, all packaged neatly, like a luxury watch, in a bright chromium housing.
You never get on the Eldorado, but rather you settle comfortably into the saddle. Positioned just 724 mm from the ground, the new saddle, together with the generous floorboards an the comfortable bullhorn handlebar grip, is an invitation to take a seat, press the start button and let the asphalt roll under your feet for at least 300 kilometres, which is the minimum range guaranteed by the sculpturesque 21 litre fuel tank.
If the road is a never-ending Interstate Highway you can activate cruise control by pressing the button on the right-hand electric block and sail along as you listen to the throbbing 90° V-twin filtered by the big block's elastic-kinematic mounting system, knowing that if you need or desire it, the cardan final drive will be ready to unleash up to 120 Nm onto the tarmac at 2,750 rpm. Technically unchanged, the twin cylinder confirms its monumental architecture enhanced by the polished valve covers with Moto Guzzi silk-screened on them and the tight and smoothed cooling fins. The engine is an absolute benchmark in its category for engine capacity-performance-consumption ratio thanks to excellent thermodynamic performance combined with advanced Ride-by-wire multimap electronic management. This technology allows the rider to choose one of three engine management maps: Turismo, Veloce and Pioggia.  And that's not all: the dynamic performance of the vehicle is also kept under control by its latest generation traction control system (MGCT) which can be adjusted on three actuation levels in order to increase active safety without impacting performance and riding pleasure.
. 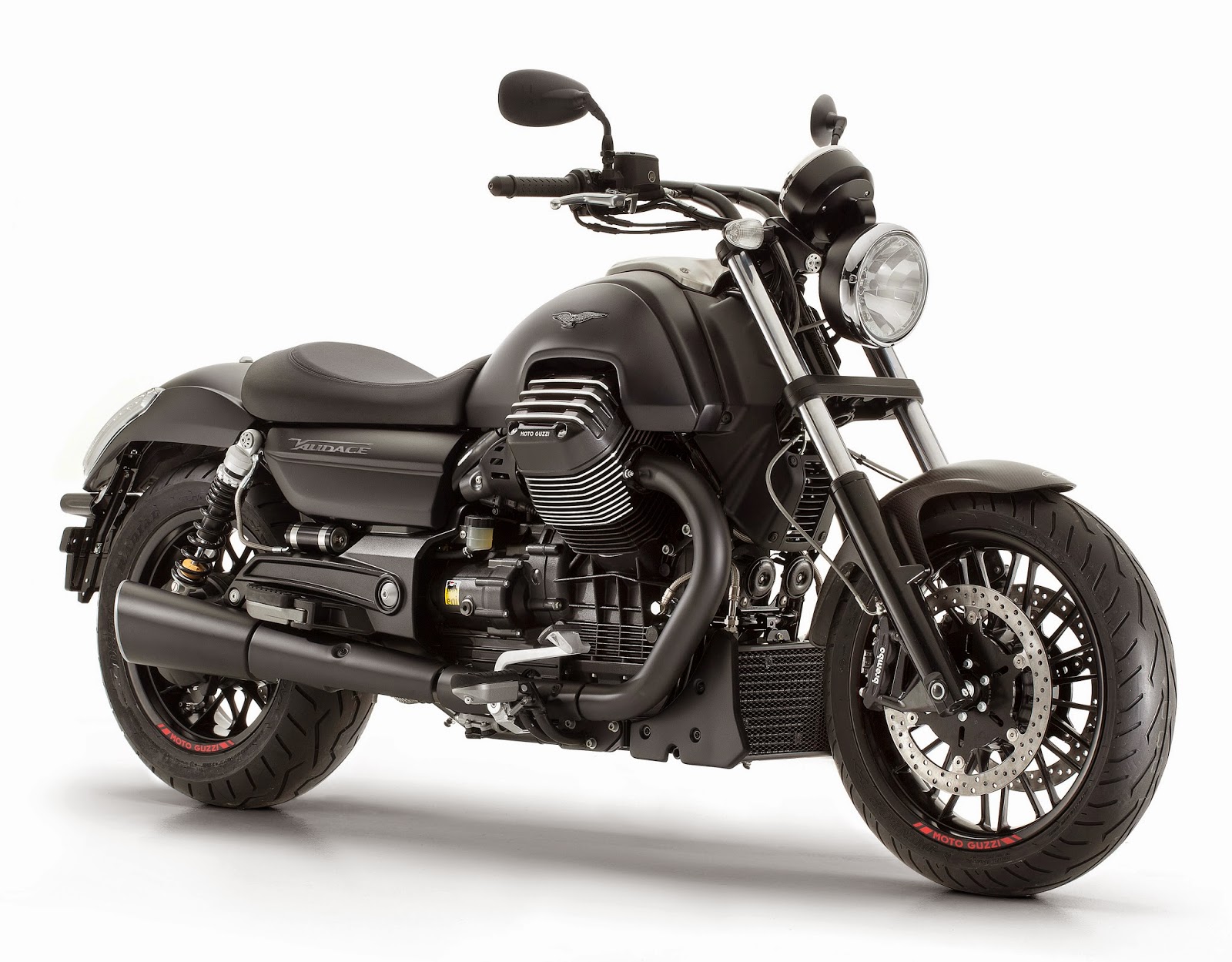 2. MOTO GUZZI AUDACE: THE MUSCLE BIKE THAT SCRAPES THE ASPHALT.
Ostentatious, muscular and fierce, the Audace can be picked out immediately by its front end, made stylistically lighter by the circular headlight unit and the carbon mudguard mounted on a fork without any telescope covering. It has no chromium plating so every mechanical detail, each small exposed metallic part is dark as night, an ideal condition for fully enjoying a bike in solitude with the striking beauty of the Audace.
Light comes through only in the stark contrast with the colour of the lateral strip that shows several brand new details. Like the undersump lug that gives the side view a gritty look, the metallic radiator grille and the short megaphone exhaust which, despite its rebellious look, is actually Euro 4 approved.
The side panel covers have also been changed, lightened like the passenger footpeg bracket. The platform footboards mounted on all the other models in the range are gone here, as is the rocker gear shift control in order to make room for sportier footpegs mounted farther forward and the classic gear shifter pedal.
Particular attention was given to the saddle, covered in Alcantara skai with exposed red stitching, lowered in terms of the seating position and installation ready for the foldaway passenger seat. The drag handlebar is also new which, thanks to the forward position of the footpegs and the different seating level, create a longer and more dominating riding position.
Another particularly elegant feature is the burnished valve covers, the rear shock absorbers with separate gas bottle and the alloy wheels personalised with the Moto Guzzi logo, as well as the minimal mirrors.
Powerful and aggressive, the Audace looks as if it is crouched down on its haunches like a large feline ready to unleash its explosive power to scratch the asphalt, leaving the mark of its oversize 200/65 rear tyre. The generosity of the 1400 cc "Made in Mandello" 90° V-twin is well known by now and on the Audace, thanks to the exhaust system with redesigned fluid dynamics, is even more lively at high revs. As a result, thanks in part to weighing a few kilos less, the Audace is definitely quicker off the line. It will certainly be the one that is most used with the “Veloce” output map and the one where the MGTC traction control system will need to intervene most often…


3. MOTO GUZZI CALIFORNIA 1400 TOURING S.E.: A CHANGE OF CLOTHES.
In addition to the Nero Ambassador and Bianco Eldorado versions, for 2015 the California Touring is available in a new version called “S.E.”
Characterised by a new two-tone graphic, this version, which has a built-in passenger backrest and grab handle, emphasises the virtual continuity with its ancestors through the reinterpretation of various style elements. The most obvious of these are connected to the profile of the saddle, the chromium grab handle and the side panels inspired by the T3 as well as a ratio between the fuel tank and engine sizes which favours the latter, just like the style of the glorious V7 and V850.
This impression is given especially by the ingenious fuel tank, made in metal, with a 21 litre central body and two side covers where the Eagle logo is proudly displayed, moulded on the powerful thermal units of the round headed 1400 cc engine.
This impression is further accentuated by the horizontal lines of the highly polished silencers that end at the rear mudguard, moulded over the impressive 200 tyre and equipped with a spectacular dual LED light cluster that also includes the turn indicators. The front view is no less impressive, with a complex surface headlight unit and a polyelliptical light with LED daylight running light (DRL).
The particular polygon shape of the headlight dominates the luxurious front end, enriched in classic California tradition by the windshield and supplementary lights, painted to match the body, as well as the new front deflectors.
The lightweight alloy wheels are an original ribbed design like the headlight frame, the supplementary lights, the handlebar and the valve covers.
The 46 mm front fork is another throwback to its glorious ancestors: completely sealed by dominating “telescopes” which are now chromium plated. Intended for those who devour kilometres, the California Touring S.E. is unrivalled in terms of comfort and load capacity thanks to its generous saddle and the spacious and elegant 35 litre side panniers, the cruise control feature and the dampening action of the elastic kinematic engine mounting system. The engine mounted is the sculpturesque 1380 cc big bore, the absolute top of its class in terms of performance and consumption, equipped with Ride-by-wire multimap electronic engine management.
This technology allows the rider to choose one of three engine management maps: Turismo, Veloce and Pioggia.
The dynamic performance of the vehicle is also kept under control by its traction control system (MGCT) which can be adjusted on three actuation levels in order to increase active safety without impacting performance and riding pleasure.