Living the true Biker Lifestyle
No matter if Sturgis, Daytona or EICMA Custom: Bean‘re seems to be everywhere. His first book tells his tale – and now Bean‘re is World record holder!

Heading for the Guiness-Book of World Records Bean‘re broke the long-distance Minibike-Record: 1407.6 Miles in 9 days on the Road to Sturgis! 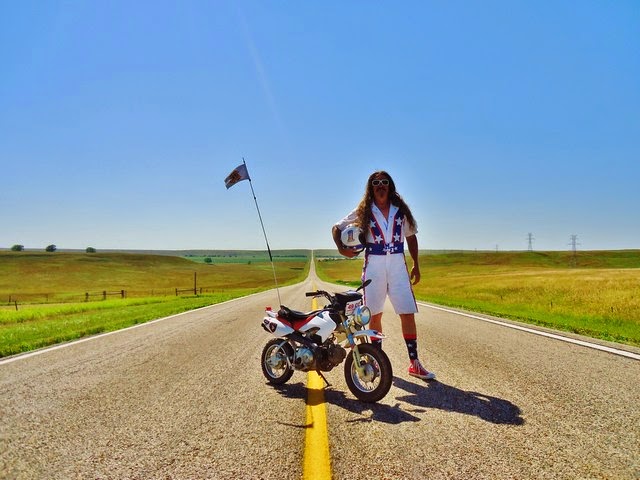 You may have seen him in Daytona, Sturgis or somewhere else around the world – because Bean‘re is a „travelling man“. A custombike-riding one too, since his first Harley-Davidson was customized and has started life as a 1997 „Road King“ Police version, retired with more than 340.000 Miles (!) on the counter (of which the Police Service only accounted for 800!) to the National Motorcycle Museum at Anamosa. His new ride – again looking like a crossover between Chopper and Bagger, was built to Bean‘res style of riding and the fact that he litarally lives „on the bike“, riding on two wheels all over the US, where ever his dates, appointments or weather forecast will lead him. Based on a 2010 „Ultra“, which is quite a choice for Chopper base anyway, the front end is 12-Inch over with a stylish 23-Inch wheel pointing the often heavy packed „Freightliner“ to where ever Kevin is heading. Fortunately for him, in the last years his positive minded personaity has also won him a lot of friendships in the industry, so some components were aquired with the help of sponsors, for whom Bean‘re is one of the best „Ambassadors“ you can have: Road testing and presenting their peoducts „on the road“. 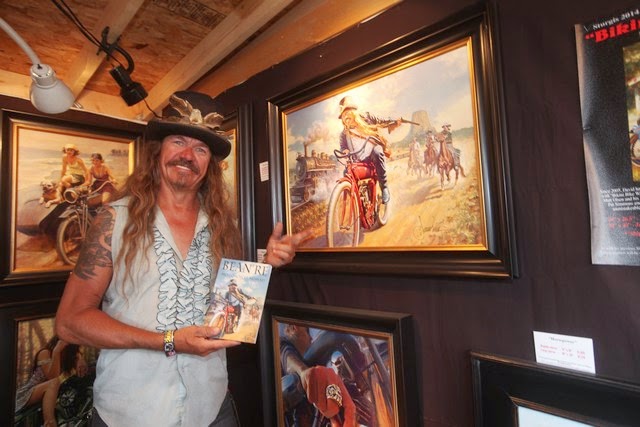 Sturgis 2014 at the booth of David Uhl who painted the famous „The Iron Heist“ oil painting that pictures Bean‘re as Motorcycle-mounted „Outlaw“.  A picture that could not be further from the real Bean‘re, if you know him...

That he occassionally „rides the f***“ outta the machine helps with the image and can be seen on his website: Dirt Track with a Choppeer, gravel roads, riding freehand or standng on the seat – no problem. Few people realise how handy a chopper really is, thanks to the additional leverage of extended and apehanger handlebar. His target: The million mile mark! Which he is en route to cross with this motorcycle. There is little doubt that he will make that mark. What else can you say about somebody who ride 1.407,6 Miles from Louisville/Netucky to Sturgis/South Dakota in an ass-torturing 9-day ride, breaking the existing „Guiness Book“ record by some 900 MILES!!! On a 50 cc Honda Minibike against which the „Monkey“ can be seen as a „Big Bike“. That‘s „kickin‘ Ass“ Bean‘re style! Since the record run for the history books took place for the 74th edition of the Rally in 2014, it‘s not yet a chapter in his book „Motorcycle Nomad“, which has been written by Timothy Remus and friends of Bean‘re. 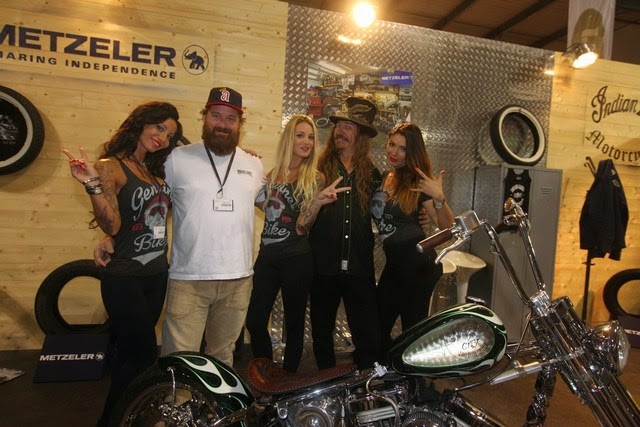 At EICMA Custom 2014 for signing his books – and posing with the EICMA Custom Girls and Bobby from Indian Larry Motorcycles. 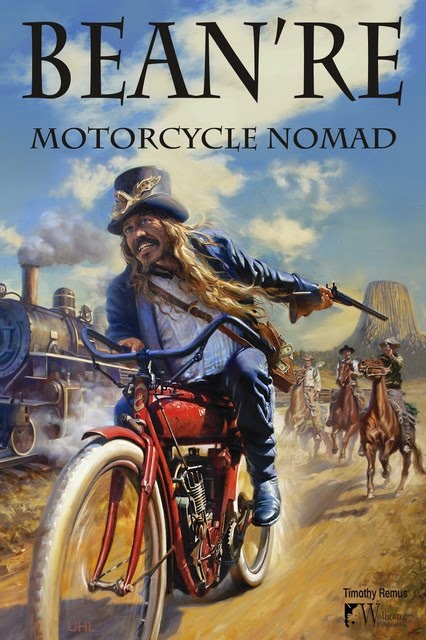 David Uhl immortalised Kevin Bean‘re in his famous „The Iron Heist“ painting – the official Sturgis Rally painting of 2013 – which combines the riding Bean‘re with the (far from reality...) role as a motorcycle-mounted outlaw and some other „phantasy“ elements (there never was a railway near Devils Tower...). Well, it‘s art, it‘s looking great – and its a great cover for a great book. It tells the tales of a life „on the road“, making a living as a „motorcycling carpenter“ who is  one of the essential personalities of the American Motorcycle scene. One of the nice, pleasant and likeable ones. And one which can be booked to appear at your event. Although „on the road“ on two wheels, Bean‘re is always dressed in outfits you would not define as the average motorcycle riding gear – to say the least. Usually as purple and as glamorous as his motorcycles custom painting. His record minibike trip was obviously undertaken in Evel Knievel style shirt and SHORTS!! 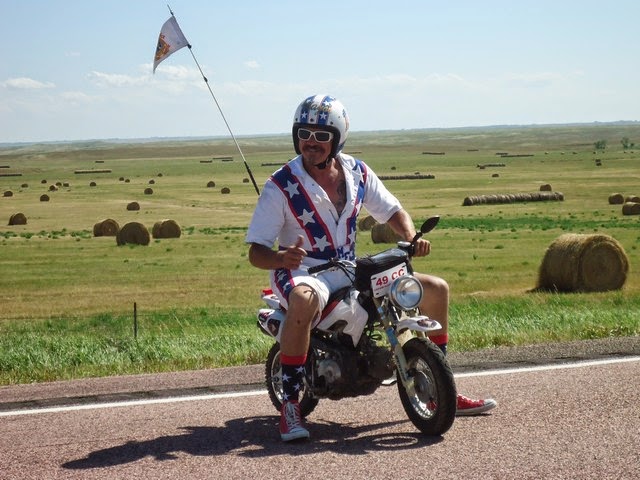 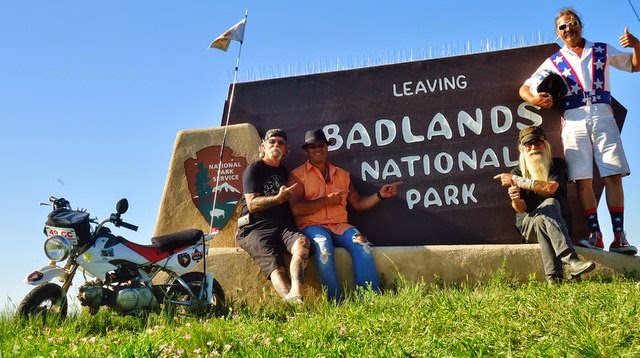 For a few years, he was the official „Major of Fun“ at the Buffalo Chip Campground outside Sturgis and fun is something you can have with Bean‘re where ever you see him! This was also recognized by Emanuela Conti, alias „Ela von Dutch“ who booked Bean‘re for the EICMA Custom 2014. „I‘d love to come to Europe more often, but the basic truth of the motorcycle lifestyle „on the road“ is that you need funding“, says Bean‘re with his typical smile, a smile that defies the harsch realities of living in a country that encourages „Enterprise“, but is unable or unwilling to offer its citizens any form of security in terms of health or in case of emergency. Bean‘re must know, because he had been member of the Marines, the US-Forces elite. „I come by bike or alone, with friends or without, but somebody has to pay the ticket...“, says Kevin. Bean‘re is always worth the money – and give him a bike, he‘ll show you some riding tricks too. For his appearance shedule, check out his website. 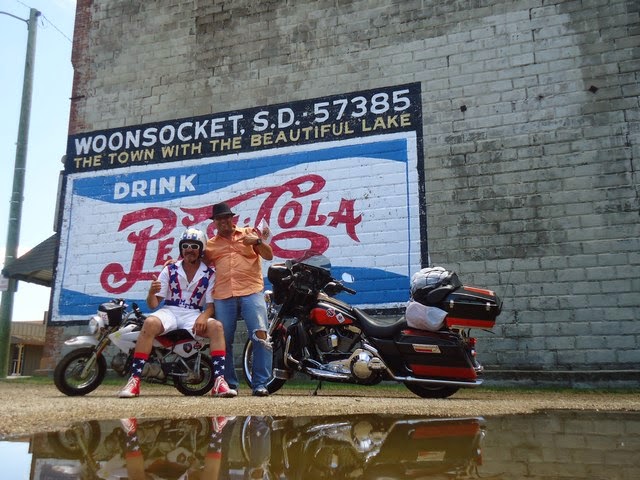 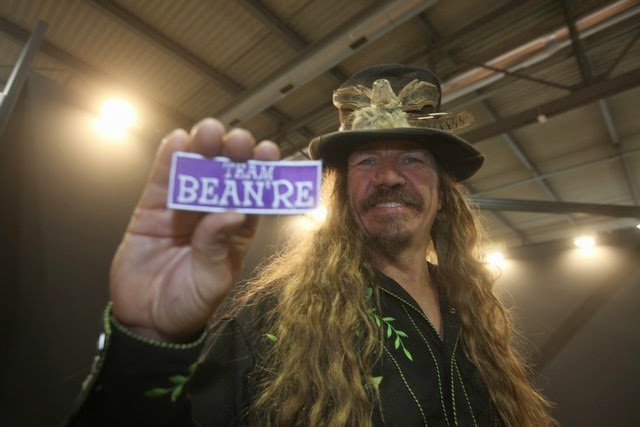 Plans for 2015 are sketchy, but after traveling in the U.S., Canada, Europe, Mexico, northern Africa and Australia, it is obvious that Asia came into his focus. Sturgis‘ 75th Anniversary in August 2015 is a fixed date for sure – and the „Major of Fun“ will then reign at the Glencoe Campground (www.glencoecamp.com), which will be back in force for what might be the biggest biker party ever. 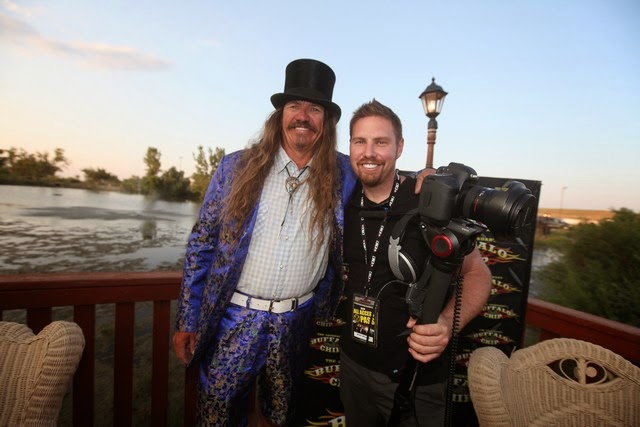 If you see him „on the road“, have your picture taken with him, talk to him,
help him but the least: Give him a smile! Because Bean‘re is fun!
And that is something that has become so rare in our times...

Bean‘re in the middle of nowhere on oe of the typical  lonly roads of America, probably in Iowa. His assisting team members for that record were Mailman (well known from his „Penny Bike“ Rat-Harley!), Brother Speed and Tim Ford who followed him on his bagger at 30mph the whole way. The story  of this record bears also witness to Bean‘re‘s personalty and how people support him: The previous Minibike record was set in March of 2014 by William Rodgers of Tennessee who rode 509 miles beating out the previous record of 445.26 miles held from 2009. Originally Bean‘re wanted to set the record on his own Minibike-Racer, but experienced engine problems. When Rodgers heard of that he borrowed Bean‘re his own record braking machine for the trip, only to see his record broken... 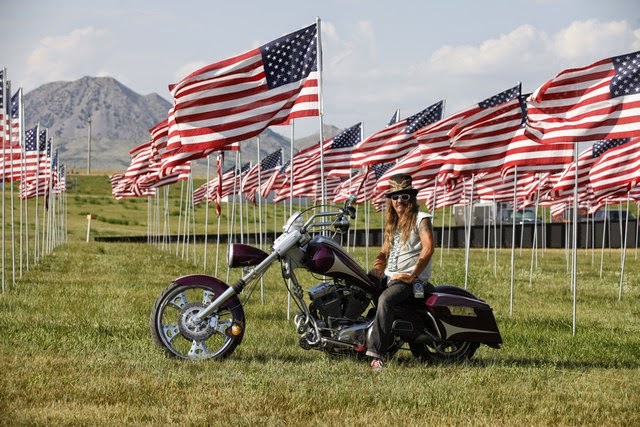 Back in the saddle of his re-styled „Purple Beast“ after a gruelling 9 days / 1407.6 miles record trip on a Honda Minibike! 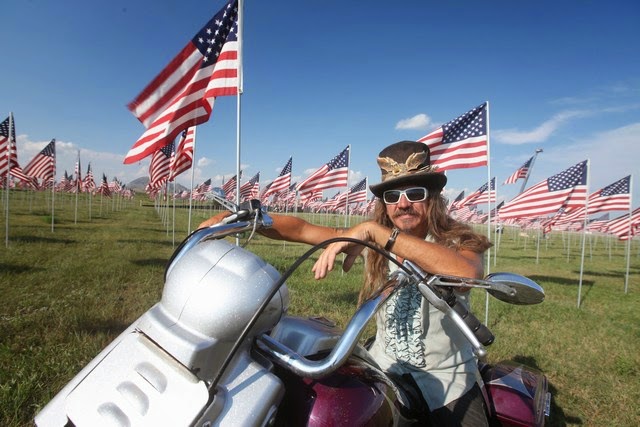 Bean‘er at the 2014 Sturgis Rally at the „Field of Flags“ outside the Buffalo Chip Campgound. It‘s here where he meets a lot of his friends and aboard his recently rebuilt „Purple Beast“ that served him more than 300.000 Miles on American roads and all over the world...

Available in Bookshops worldwide! Signed versions can be ordered at

Here is a great Video NBC News did on the mini bike trip- https://www.youtube.com/watch?v=XSBuG28RTMg