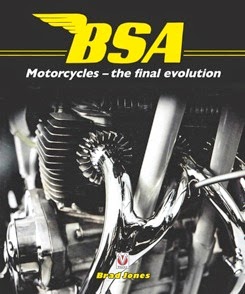 Features
• All 1971/1972 BSA and Triumph models described and pictured
• Detailed study of the 350cc DOHC Fury and Bandit twins
• Tells of fascinating prototype and development work, including the X-75 Hurricane
• Over 200 photos, 125 colour, and 50 previously unpublished
• BSA’s impressive 1971 competition successes fully documented
• A comprehensive look at the 50cc Ariel 3 trike
• Small Heath and Umberslade Halls infrastructure and functions explained
• BSA’s finances detailed from 1969 to 1973, including investment expenditure
• The re-organisation of personnel and operations in the USA
• Information largely sourced from original documentation and eye witnesses
Description
A fresh, much needed appraisal of BSA and Triumph motorcycles designed for the 1971 model year, plus BSA’s revolutionary Ariel 3 moped, and the 750cc Triumph Hurricane that was originally planned as a BSA model.
This book also presents a comprehensive study of the related promotional and racing events, as well as the US organisation, and an in-depth account of BSA’s financial position before and after mid-1971’s devastating trading loss announcement.

Synopsis
Presented for the first time in one book, the new-for-1971 range of BSA and Triumph motorcycles, including the 350cc DOHC twins, the innovative Ariel 3 moped, projected D18 Bantam, and the X-75 Hurricane, are all detailed in depth, along with related promotional and
racing activities. Photoshoots, the lavish series of brochures and ads that emanated from them, and projected and actual colour schemes, are also presented with great accuracy.
By delving into the archives of several historical institutions, a comprehensive account of the hitherto largely ignored massive infrastructure investment that took place at BSA’s Small Heath works during much of 1970 is revealed, along with its re-organised North American setup.

Also included is an equally fresh and detailed appraisal of BSA’s financial situation, from the dawn of the 1970s, until its oblivion in 1973.
Besides the many new revelations, this book contains an impressive collection of extremely rare factory photographs, many of which have never been published before, and thought to be the only copies in existence.

Additional Information
Until now, a very misreported period of BSA’s history that deserves to be recorded accurately

For the first time the 1971 BSA and Triumph models, racing achievements, promotion, prototypes, finance, politics, etc, appear in one book