Buffalo Chip Hosts Record Number of Events and Entertainers in 2014

Buffalo Chip Hosts Record Number
of Events and Entertainers in 2014

Sturgis, SD – The 2014 Sturgis Buffalo Chip®, Motorcycle and Music Festival has throttled down, and riders are leaving with both a trove of memories and reservations for the 75th anniversary Rally in 2015. The nine days and nights of world-class concerts most certainly topped guests’ favorites list, but the Chip offered more exciting events, thrilling activities and breathtaking rides than any other rally venue and presented difficult choices for patrons each day. Motorcyclists from more than 18 countries and all 50 states chose the Sturgis Buffalo Chip as their home away from home and film crews from as far away as Russia, Japan and China arrived to record Chip events. 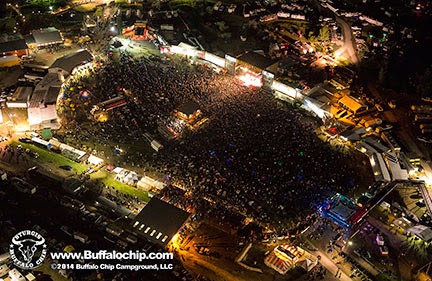 Buffalo Chip guests turned out in droves for 9 nights of amazing live concerts. Some of the biggest names in the music industry, such as Mötley Crüe, Alice Cooper, Collective Soul, Florida Georgia Line, Lynyrd Skynyrd and ZZ Top, exploded onto the main stage, filling the natural amphitheater with heavy metal, cross-over country, blistering blues, glam rock, rockabilly, and alternative rock. The audience was left high with excitement long after the
concerts echoed over the din of thousands of motorcycles,

“Every performance on the main stage this year was outstanding,” says Sturgis Buffalo Chip President, Rod Woodruff. “The line-up this year offered tremendous talent, intense energy, incredible staging and some of the best music anywhere. The audiences were totally captivated.”

Jesse Watters, star of the popular O’Reilly Factor segment, Watter’s World, spent Tuesday, Aug. 5 filming at the Buffalo Chip and interviewing campers. Watters fired a 50-caliber machine gun at Guns of Freedom exhibition, rode in a TORC truck at the Buffalo Chip PowerSports Complex, signed autographs and posed for photos with numerous campers throughout the day. The segment will air on FOX News as part of the O’Reilly Factor on Monday, Aug. 25. 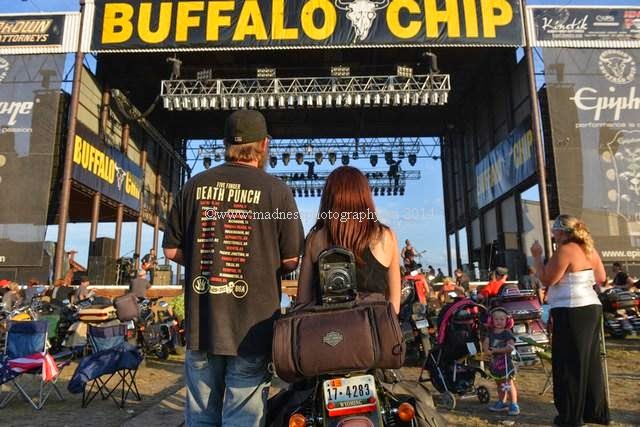 The HISTORY Channel lined up some of the biggest names in custom bike building to film the finale of its new show, “Biker Battleground Phoenix,” at the Chip on Wednesday, Aug. 6. John Shope, Paul Yaffee, Kody McNew, Brian Jenkins and Len Edmondson competed in the series. Shope walked away with the title, which was announced on the Buffalo Chip main stage after a day of judging at the CrossRoads. HISTORY will air the finale on Tuesday, Aug. 26 at 9 p.m. MDT.

The Bling Johnson Show from Austin, Texas also filmed at the Buffalo Chip. The show will air on CW affiliate networks, one episode of a 13-show season, this fall.

On Saturday, Aug. 2, the 2014 Motorcycles as Art exhibit, “Built for Speed – Race Inspired Motorcycles and Art,” opened to an enthusiastic crowd. This marked the sixth consecutive year the annual Buffalo Chip exhibit has been curated by famed motorcycle photographer, Michael Lichter, and the second year with the Vintagent’s Paul d’Orleans. The show featured the work of such well-known bike builders as Arlen Ness, Brian Klock and Roland Sands; paintings by David Uhl and Marc Lacourciere; and photography by Michael Lichter among many others. The show ran through Friday, Aug. 8.

The CrossRoads at the Buffalo Chip® held an unprecedented number of custom bike shows, allowing motorcycle enthusiasts to ogle the mechanical masterpieces staged in its center court. Jeff G. Holt, the editorial director of the top three custom motorcycle magazines in America, decided it was time for some down-and-dirty contests to find the world’s best custom motorcycle, bagger and chopper builders. All builders were invited to enter the “Winner Takes All” shows on Aug 3, 4 and 5. Each show awarded its winner $5,000, valuable prizes and serious bragging rights. The Cycle Source Nighttime Chopper Show brought out the baddest bikes on Aug. 6, and the 26th annual Rat’s Hole Custom Bike Show blinded spectators with chrome on Aug. 7.

Riders in the Buffalo Chip’s signature Legends Ride® cheered Monday, Aug. 4 as Black Hills Special Olympics President, Jack Lynass, and Buffalo Chip President, Rod Woodruff, burned the note on a van purchased with Legends Ride donations. Special Olympics athletes use the van to travel to events and training sessions. Some of the biggest names in television, film, music and motorcycling joined hundreds of riders from around the globe for the annual ride through the scenic Northern Black Hills to raise money for two local charities, Black Hills Special Olympics and the Sturgis Motorcycle Museum and Hall of Fame. A check for $54,800 was presented to the two charities thanks to the generous donations of Legends riders.

The Biker Belles®, presented by Harley-Davidson®, didn’t allow the rain to dampen spirits on Tuesday, Aug. 5 as they gathered at the Lodge at Deadwood for a symposium of leading industry women, aptly titled “Ride On.” The Leading women in motorcycling welcomed old and new faces, enjoying friendship, a symposium discussion, and a viewing of Michelle Carpenter’s film, “Driven to Ride” and the Comfort Zone by Team Diva. Thanks to the efforts of ride captain and safety expert, Vicki Roberts-Sanfelipo , the ride did not proceed as planned due to weather conditions, but riders were encouraged to ride in small groups at their own pace to the Buffalo Chip for the catered reception, Harley-Davidson Motorclothes fashion show and silent auction. The Buffalo Chip postponed the live auction to a later date, and proceeds of the event will benefit Helping with Horsepower and the Sturgis Motorcycle Museum and Hall of Fame.

Rally enthusiasts have already begun making reservations for the 75th anniversary celebration in 2015 at the Buffalo Chip. Those wanting special amenities and the best prices will want to make reservations early.