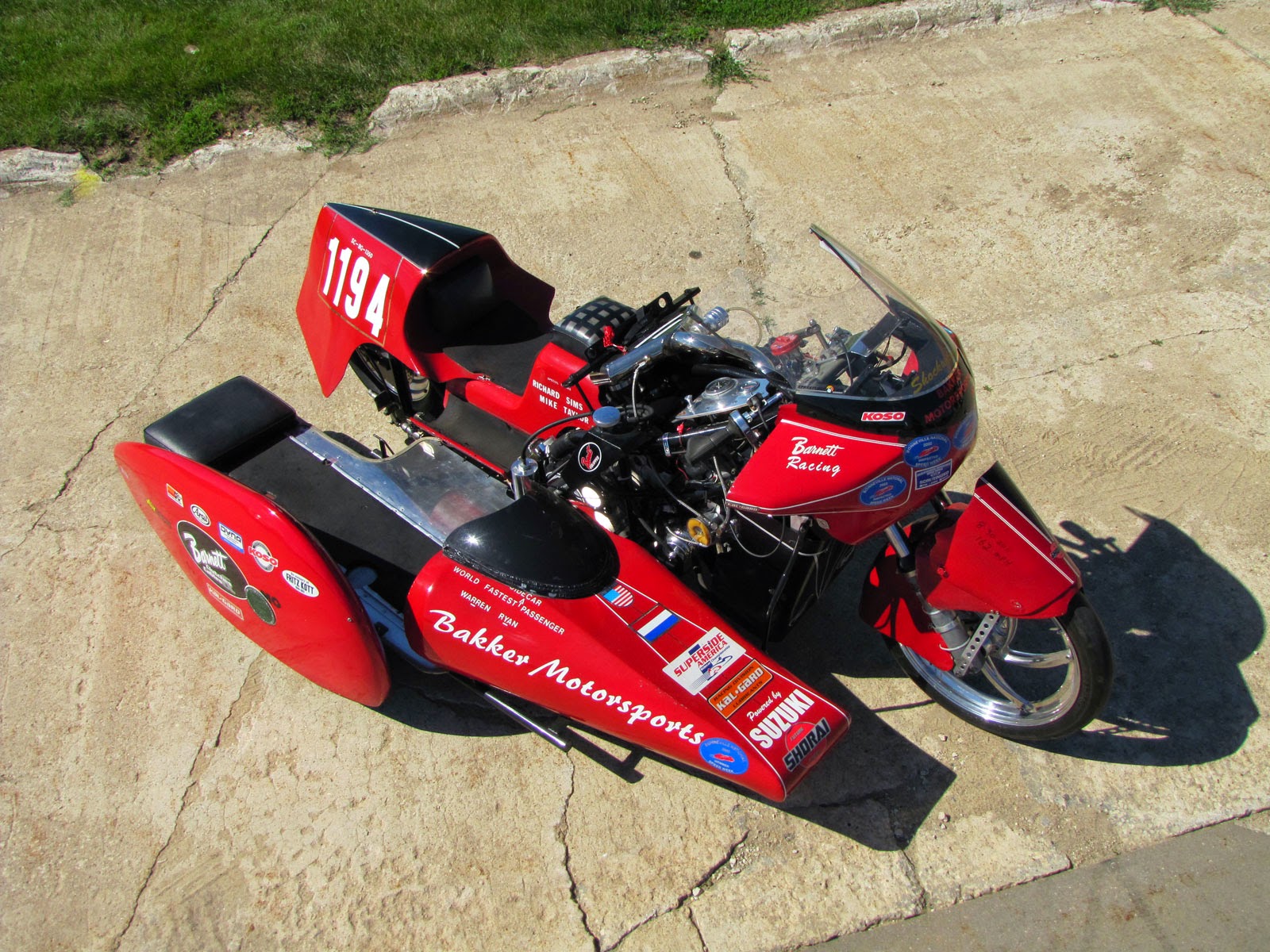 “I built it in my shop with a couple of my best fabricators. All my sponsors helped a ton. At Bonneville in 2011 my good friends Larry Coleman and Warren Ryan set an AMA record with it that still stands. I can’t let it sit or sell it. I figure it belongs in a museum!” 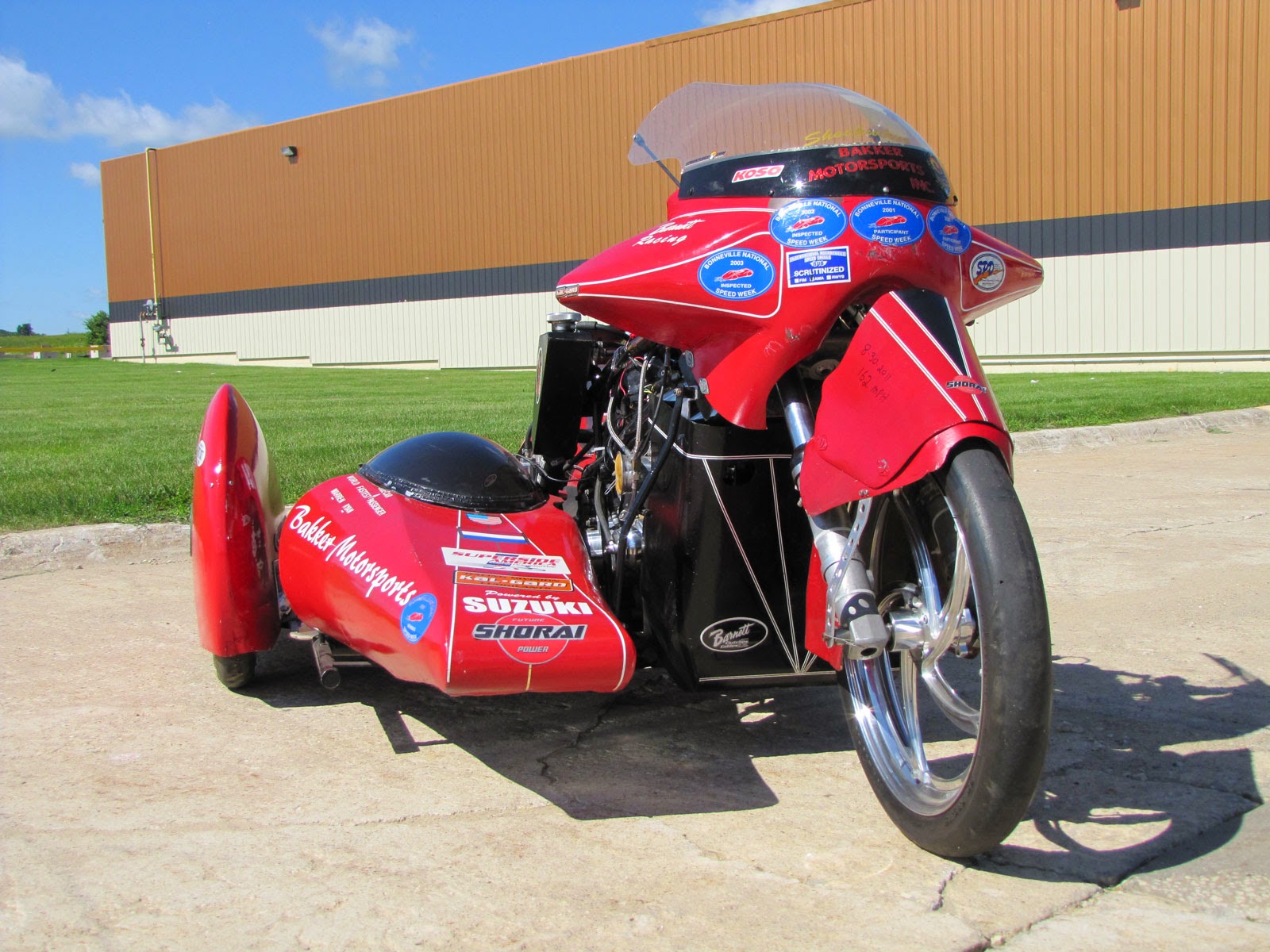 And so this one of a kind, record holding turbo-charged Suzuki Hyabusa-powered streamliner becomes the 9th really fine motorcycle donated to the National Motorcycle Museum’s permanent collection in the past year. It will share display platform space with several other Bonneville bikes
and you can see it on your next visit. 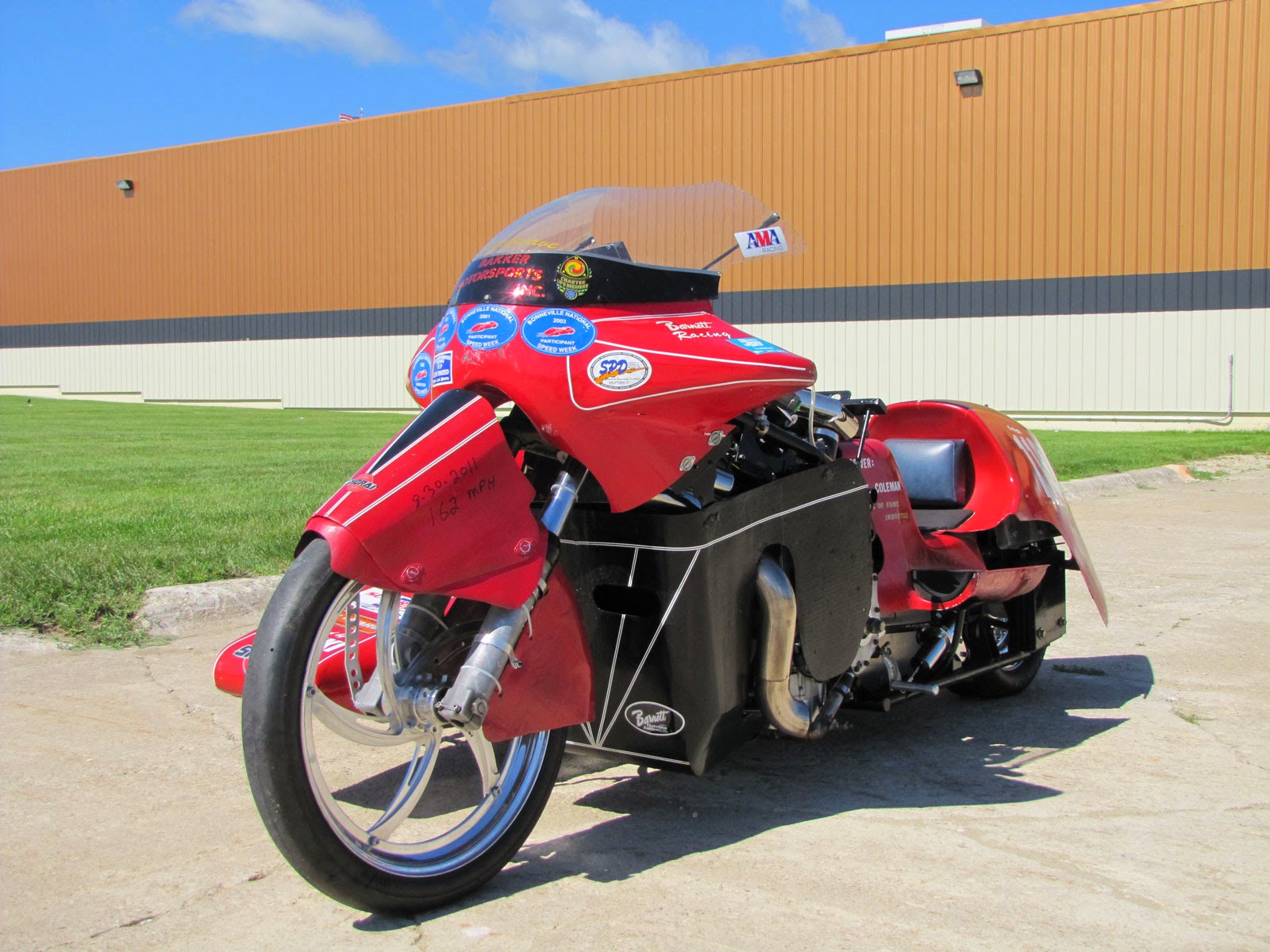 Land Speed Racing Sidecar “ Shockwave” is the current record holder at over 162mph. Given the asymmetry of a sidecar motorcycle, power delivery, wheel weighting, track and drag coefficient, designing a machine for Land Speed Record competition is a special challenge. 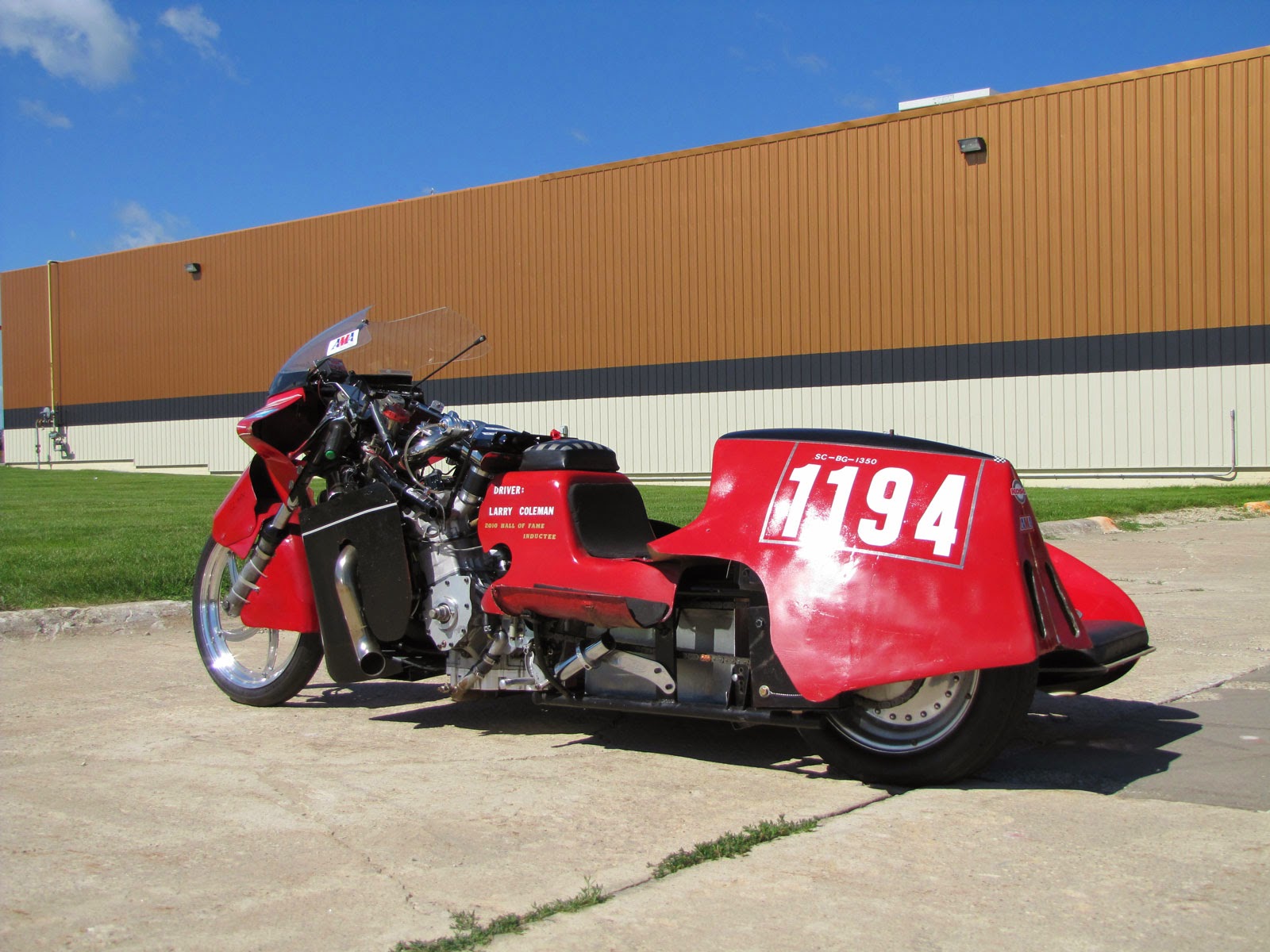 The 21st Century has brought new interest in the challenges of land speed record competition. But way back in the 1950′s Bob Bakker was on the salt at Bonneville seeing just how fast he could make his motorcycle go. Later his focus became the sidecar record and has remained so for 60 years. Teaming up with sidecar road racing champion and Hall of Fame inductee Larry Coleman, Bakker and his shop did the design and fabrication of the rig. 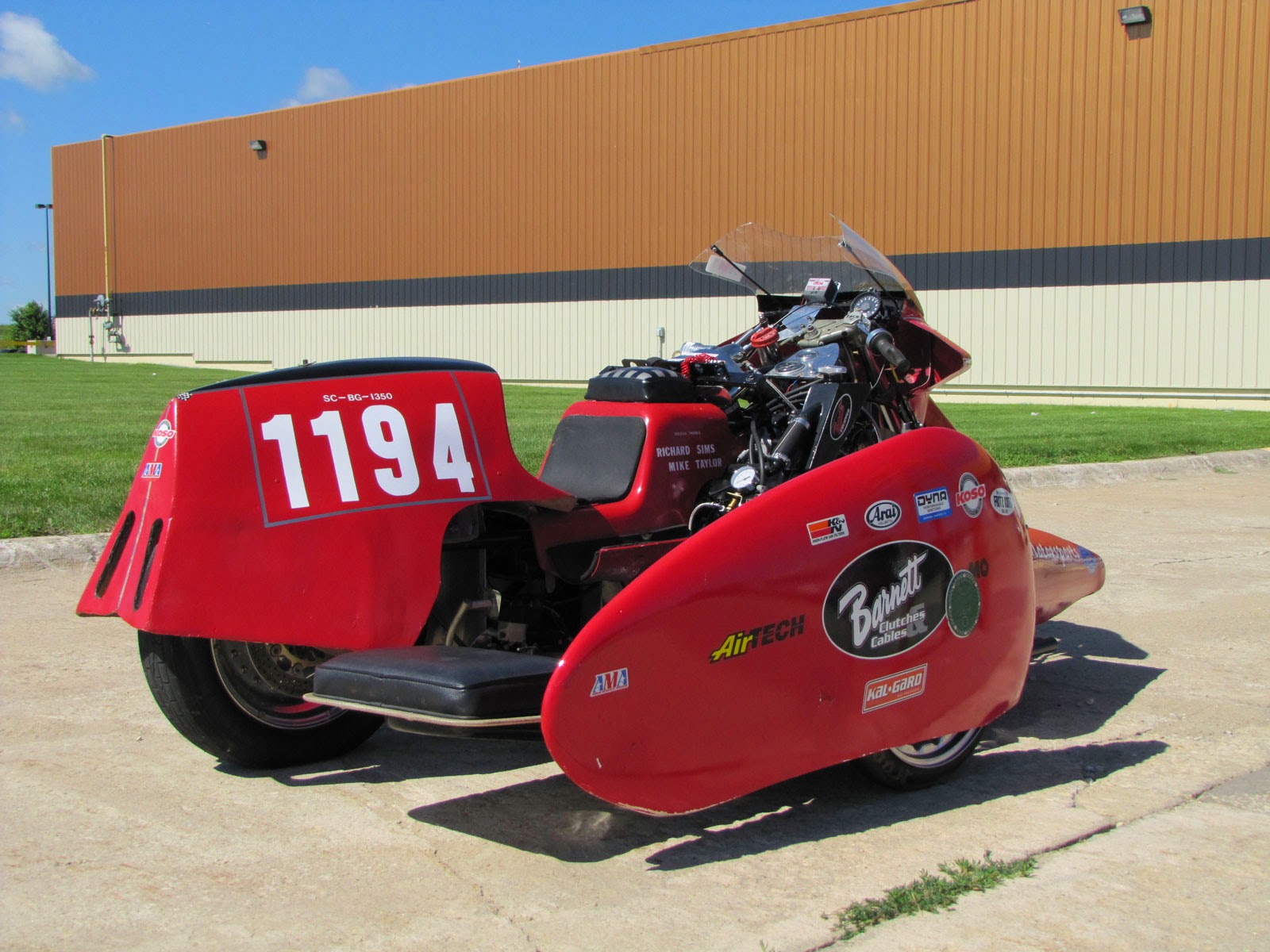 Larry Coleman and the passenger, Warren Ryan, used up to 14 miles of salt to establish their record.Unlike a four wheeled vehicle, the aerodynamics of a sidecar rig present special challenges. Differences left to right in frontal area forces can deflect the machine off course. More horsepower is needed and power is put down on one side only, through just one wheel, another uneven force to reckon with. 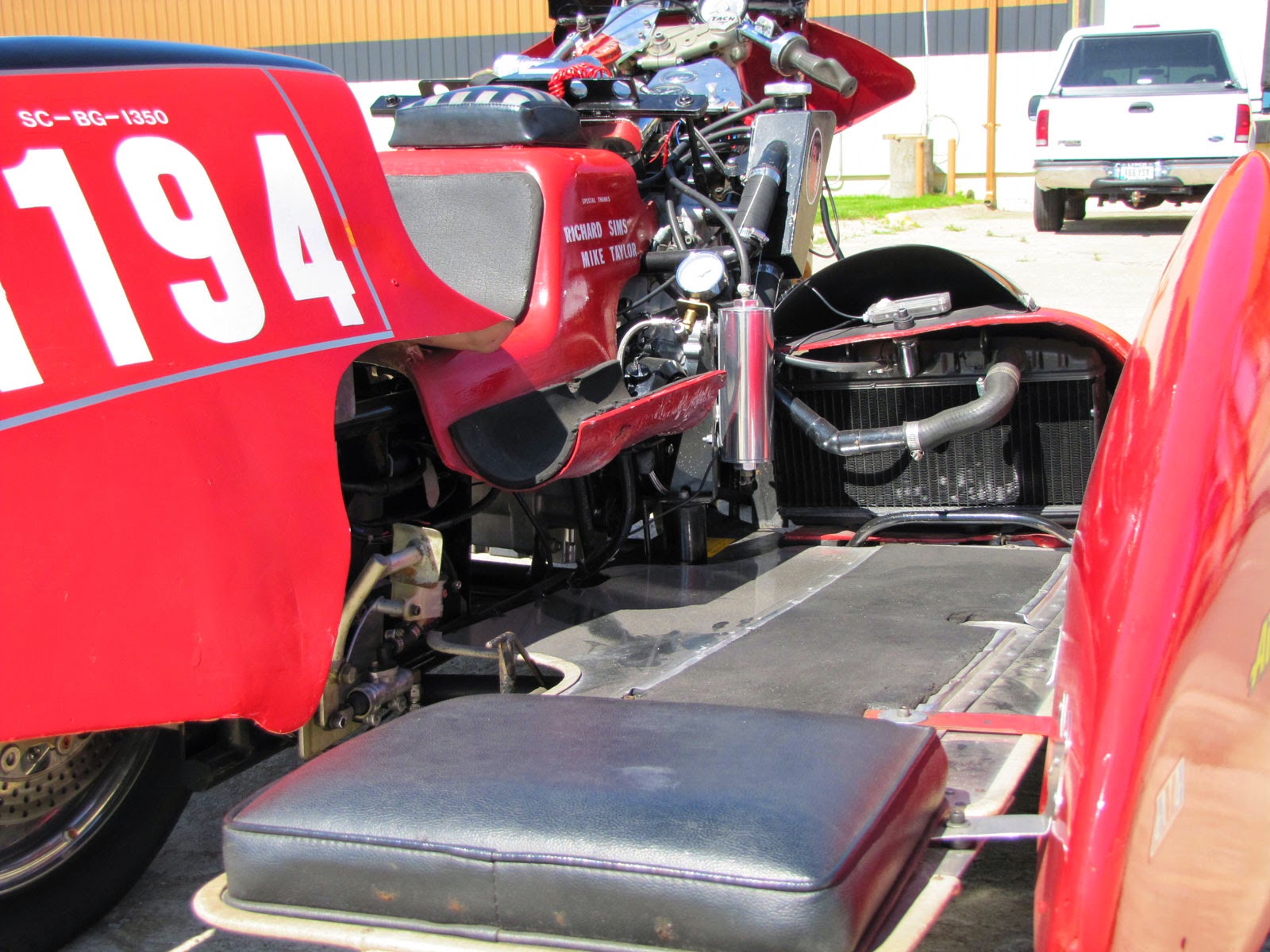 Bakker, Coleman and Ryan prevailed. This Suzuki Hyabusa powered sidecar rig established an AMA National record 162+ MPH in 2011. After four attempts since by other teams, the record stands that still stands.

Donated to the National Motorcycle Museum by Bob Bakker

The National Motorcycle Museum is a non-profit 501 (c)(3) corporation.
For more information, email the Museum at museum@nationalmcmuseum.org or
call 319 462 3925.
Posted by Onno "Berserk" Wieringa www.madnessphotography.nl at 19:39