Slingshot three-wheeler announced by Polaris
POLARIS, the parent company of both Victory Motorcycles and Indian Motorcycles, is celebrating its 60th anniversary by releasing details of a new vehicle. The company is describing its new Slingshot as a three-wheel roadster. 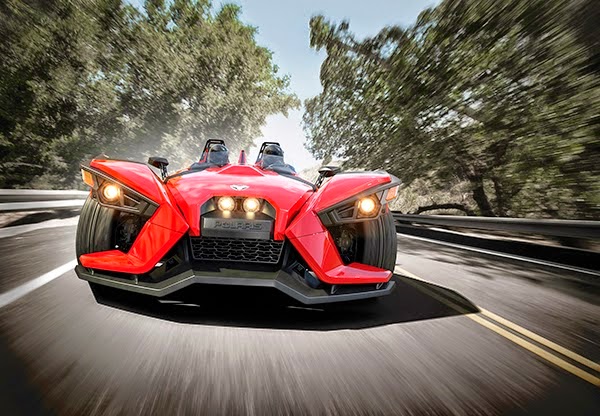 “Slingshot was designed to deliver head turning exhilaration on two dimensions,” said Mike Jonikas, VP of Slingshot. “First is the exhilaration that you can see, hear, and feel while riding in Slingshot. Second is the exhilaration you feel when people turn their heads to stare at Slingshot’s unique and exotic styling.”
The Slingshot has two wheels at the front behind which is side-by-side open air seating for two. The Slingshot is powered by a 2.4-liter, dual-overhead cam engine and a five-speed manual transmission, all of which is carried in a steel spaceframe that is matched to an aluminum swingarm, with final drive being via a carbon fiber reinforced belt.
Drawing on its motorcycle heritage, Polaris has equipped the Slingshot with electronic stability and traction control, three-wheel anti-lock disc brakes, and LED taillights, while from its ATV range is has taken key safety features such as forged aluminum roll hoops, and three-point seat belts.

Polaris will be offering two version of the Slingshot; the base model features titanium metallic paint, 17in alloy wheels upfront, and an 18in wheel in the rear. The premium model called Slingshot SL features red pearl paint, larger 18in forged aluminum wheels upfront and a 20in wheel in the rear, and a blade windscreen for wind protection. It also features a media console with a 4.3in LCD screen, back-up camera, Bluetooth integration, and a six-speaker audio system.