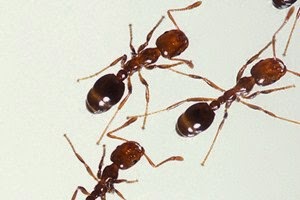 Amazon villagers took revenge on two suspected motorcycle thieves by tying them to a tree swarming with venomous ants for three days.

Bolivian authorities say the men, aged 18 and 19, nearly died of stings from fire ants in Ayopaya.

They were freed on Saturday when relatives paid a ransom of nearly $3.700,00, nearly four times the average annual Bolivian wage.

Dr Roberto Paz of Cochabamba hospital told reporters yesterday that one of the men remained in intensive care while the other had undergone dialysis for kidney failure.

A sister of one of the men, who are accused of stealing three motorbikes, said they were held for three days and would have died if relatives had not paid the ransom, demanded as compensation for the missing motorcycles.

Fire ants produce venom which can be deadly but is also used in small doses as a traditional treatment for arthritis.