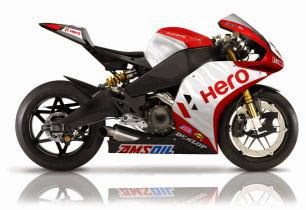 Alkmaar/Delhi-India, March 7, 2014 – Erik Buell Racing (EBR) has announced that they will be expanding their presence on the AMA Superbike grid. Along with partnering with AMSOIL and Hero to support Pegram Racing’s Foremost Insurance entry, they will field an AMSOIL/Hero entry for Cory West to compete in the American Motorcyclist Association’s (AMA) Pro Racing’s SuperBike class for the 2014 racing season. The new entry will campaign EBR’s 1190 motorcycles as Team AMSOIL/Hero, and are joined by additional sponsors Shorai, K&L Supply and Foremost Insurance.

Said EBR Founder Erik Buell, “EBR, Hero and AMSOIL have already committed to race our American superbikes in WSBK, and partnered with Pegram Racing to field an EBR 1190 in the Foremost Insurance livery for AMA Superbike racing. But we were really hoping to continue the tradition of an AMSOIL/Hero EBR bike on the grid. With the additional support of Shorai, K&L and Foremost, we have been able to put that together as well. The team will be pitted along with the Pegram Racing Foremost entry, and we think Cory and Larry will be excellent partners in putting on great performances with EBR 1190’s in 2014.“

AMSOIL race program manager Jeremy Meyer said, “EBR has been a fantastic partner for us as we continue to test and produce the highest quality synthetic motorcycle lubricants capable of taking the outrageous abuse of superbike racing. We were happy to support the main EBR team on their move to World Superbike, and are having a one-two punch on EBR’s with Cory and Larry in AMA Superbike will be a major benefit to our U.S. efforts.

The 2014 AMA Pro SuperBike season begins March 13-15, 2014, at the Daytona International Speedway in Daytona Beach, Fla. A total of 5 events are scheduled with a possible sixth event being added in the upcoming weeks. Confirmed events are as follows:

AMA Pro Racing SuperBikes all have at least 1000cc in engine displacement from a variety of twin and multi-cylinder powerplants. Two-cylinder, four-stroke motorcycles such as the EBR 1190 must weigh a minimum post-race weight of 370 pounds and cannot exceed 1200cc displacement engines. Superbikes prepared for AMA are capable of reaching speeds in excess of 200mph, and represent the pinnacle class of American road racing.