Shaun & the crew, including motorsports & television celebrities, will be building 12 totally unique machines for 12 different charities during their 2014 tour.

To help support our charities & to be part of the show please contact us now. 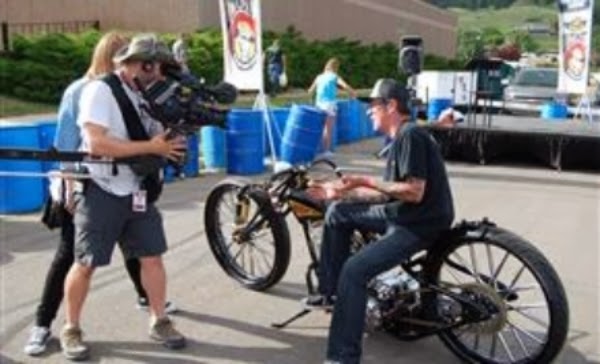 The builds & tour will be filmed as part of the Chop Deville UNCHAINED television series, giving viewers a "never before seen" look at the world of Motorcycles & The Motorsports Industry.

Shaun has taken the steps of purchasing a Nascar Style hauler/workshop which he travels the country building custom motorcycles & machines on-site & at various motorcycle & motorsports events.

"This show takes the viewer into the "Real" world of motorcycles. Shaun Ruddy is not just the host, but also a racer, an international award winning designer and builder of motorcycles. Unchained fills in all of the gaps for everything you wanted to know about bikes."

"Chop DeVille UNCHAINED, follows Shaun week after week as he travels via semi truck to motorsport shows & events building motorcycles, meeting and competing with wild and unpredictable personalities. Everything is covered from street, race, choppers, cruisers. vintage, motorcross and more.

Unchained attends various bike shows, events, dealerships, sponsor premises & even personal  homes. The team will be building 12 custom machines for 12 Charities. Follow Shaun's custom build's, interviews with celebrities, builders and the heavy hitters of the motorcycle industry.
It doesn't matter if your a builder, rider, buying, learning or just a fan of bikes, it's all here on Chop Deville - UNCHAINED.

The start of a new era is here & Chop Deville UNCHAINED will be the new leader of television & the motorcycle industry."

Working with companies & members of our motorsports community to make a difference.