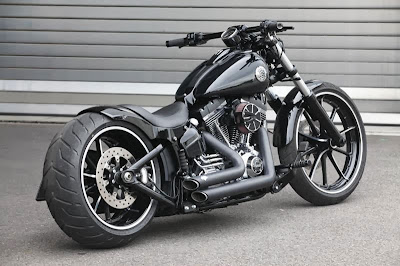 RICK'S Motorcycles, based in Baden-Baden, Germany, has already started production of custom parts for the 2014 Harley model range with the introduction of its short-cut tail end designed specifically for the Breakout Softail.
The heavy-duty metal fender by Rick's House of Custom is able to take both the rider and passenger (the latter with a pad), but has been designed primarily as a single seat unit with a view of the 240 rear tire used in the stock bike.
A special tank to seat cover is included in the kit, as are countersunk head bolts that fit the stock mounting screw holes. The addition of narrow aftermarket indicators, a Rick's side-mount license plate and the belt guard cut to size are recommended to complete the changes to the rear of the bike.

Two versions of the cut fender are available; the one shown and a second, which is 8cm longer. The latter is designed to provide more protection against dirt and more space for a passenger.