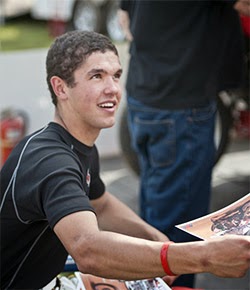 MILWAUKEE (November, 2013) – The Harley-Davidson Motor Company and Screamin’ Eagle® Factory Flat Track Team are excited to announce that 2013 AMA Pro Grand National Champion Brad Baker has joined the team as its factory rider for the 2014 season, carrying the company’s long and proud tradition of flat track racing forward into a new generation.

The 20-year-old Eatonville, Wash. resident, who became the fourth-youngest rider to win the Grand National Champion when he clinched the title at the 2013 season finale at Pomona, Ca., joins a long and illustrious list of Harley-Davidson Factory Team riders, including legends of the sport such as Joe Leonard, Carroll Resweber, Jay Springsteen, Scott Parker, Chris Carr, and Kenny Coolbeth.

“I’m pumped to be joining the Harley-Davidson Factory Team. As a young flat track racer, it’s everyone’s dream to ride for this team and follow in the footsteps of so many of the great riders I grew up watching,” Baker said. “It’s a great honor to know that I will have millions of Harley-Davidson fans around the world cheering me on. I think we are going to work very well together, and I’m looking forward to bringing the No. 1 plate to Harley-Davidson next season and keeping it here for a long time.”

Baker won the AMA Pro Singles Championship in 2009 before moving up to the Expert Twins class and winning the 2011 AMA Pro Flat Track Expert Rookie of the year award. In 2012, he rode two races for the Harley-Davidson Factory Team as a substitute for injured Factory rider Kenny Coolbeth, before joining the Dodge Brothers Racing team for the 2013 season. Baker won two Expert Twins races this season riding a Harley-Davidson XR750, including the Pomona finale, in addition to earning the Grand National Singles title to claim his first overall Grand National Championship title.

“Brad was a rising talent in 2012 when he rode two races for the Screamin’ Eagle team, but by winning the Grand National Championship this year he proved he is a star of the present and future, which makes him the perfect rider to lead our flat track racing program into the future. We have a lot of exciting plans for the program and Brad in the coming year, and we can’t wait to go racing,” said Harley-Davidson Racing Manager Kris Schoonover.

Baker will contest the AMA Pro Grand National Twins series aboard Harley-Davidson XR750 motorcycles prepared by tuner Craig Lager. Kevin Atherton, the 1988 AMA Pro rookie of the year, winner of 14 AMA Pro national races, and the youngest ever member of the Harley-Davidson Factory team, will also join the team as Baker’s riding coach and mentor.