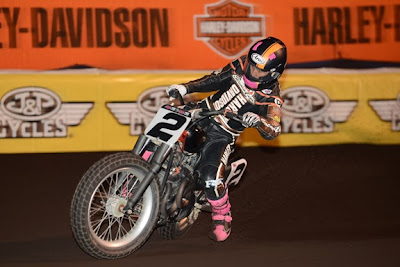 
Coolbeth won his heat race and was seeded second behind Baker for the start of the 25-lap National main on the Fairplex half-mile. After one lap the race was re-started following a red flag for a crash by Triumph rider Mikey Martin. On the restart Baker took the lead but was quickly passed by Crosley Radio Kawasaki rider Bryan Smith, the rider closest to Baker in the championship standings. On lap four Baker came close to crashing in turn two and backed off his pace, allowing Smith to gain a half-second advantage. Baker regained the lead on lap 14 as Rod Lake Racing Suzuki rider Briar Bauman and Rodgers Racing/Blue Springs Harley-Davidson rider Jared Mees also joined the lead pack. Coolbeth was in fifth place and gaining on the leaders when the race was stopped on lap 16 for a crash by South East Harley-Davidson rider Sammy Halbert.

On the ensuing staggered re-start, Baker took the lead and for the final 10 laps he and Smith engaged in a battle with Bauman also in the mix. Coolbeth could not regain his earlier momentum and slotted into sixth place. Baker picked up his pace in the final laps to lock up the AMA Grand National championship with his second victory of the season. The 20-year-old rider crossed the finish line 0.706 second ahead of Smith. Bauman was third, followed by Mees, Burnett Farms Racing Kawasaki rider JD Beach, and Coolbeth in sixth.

“Often a restart is an advantage if you are a little behind, but tonight it just killed us,” said Coolbeth. “I got behind a few riders in the ruts on turn two and then just couldn’t get my rhythm back. The track got really rough tonight, much worse than last year.”

The race was the last on the Screamin’ Eagle Harley-Davidson XR750 motorcycle for Coolbeth, who will not return as the Factory team’s primary rider for the 2014 season.

“I can’t thank Harley-Davidson enough for the opportunity to race with the factory team,” said Coolbeth. “Because of Harley I’m who I am today in the Grand National series. I hope I can continue racing on a Harley-Davidson next season.”

Coolbeth joined the Harley-Davidson Screamin’ Eagle Factory Team in 2006 and won the Grand National championship in 2006, 2007 and 2008.