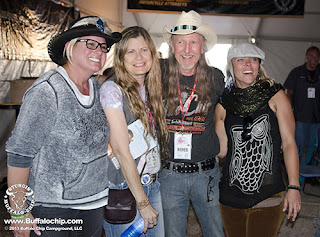 Sturgis, SD (September 2013) – A custom Harley Davidson helped raise a record donation for charity during the Biker Belles® auction on Aug. 6, 2013 at the Sturgis Buffalo Chip®. The one-of-a-kind motorcycle, donated by Bruce Rossmeyer’s Daytona Harley Davidson, was customized by moto-celebrity, Jessi Combs, for the Velocity television show, “All Girls Garage.”  The program features female mechanics repairing and upgrading classic automobiles and motorcycles, and during its Friday, Sept. 14 episode, it will spotlight both the Buffalo Chip’s Biker Belles celebration and this custom Harley.

In the upcoming episode of All Girls Garage, Jessi Combs highlights the reasons why the Biker Belles charity ride is of particular interest—celebrating women and the role they play in shaping the culture, sport, art and history of motorcycling. Proceeds from the event for which Jessi customized the bike benefit two local charities:  Helping with Horsepower and the Sturgis Motorcycle Museum and Hall of Fame.

On Sept. 14, viewers can see exclusive footage of Jessi leading the Biker Belles ride through the scenic Black Hills on the Softail Slim she customized for the show. The 2013 Biker Belles event began at the Lodge at Deadwood with an inspiring symposium of leading industry women. The day-long event then ended at the Sturgis Buffalo Chip with a special catered reception, a fashion show featuring Harley Davidson MotorClothes® and a live and silent auction.

The auction featured an array of tempting items, but the All Girls Garage customized Harley was the prize everyone had their eye on. When bidding came to a close, it was Pat Simmons of the Doobie Brothers that held the winning bid. The guitar legend and motorcycle enthusiast explained that he purchased the custom Harley Davidson as a present for his wife. Including Simmons’ purchase, the Biker Belles auction raised over $36,000 for the two charities.

“We’re proud to support women riders by hosting the Biker Belles for the fifth year,” says Rod Woodruff, president of the Sturgis Buffalo Chip. “Seeing Pat Simmons give the All Girls Garage bike to his wife was extra special, considering it was here at the Chip that the couple first met. I look forward to reliving that moment again when the program airs.”