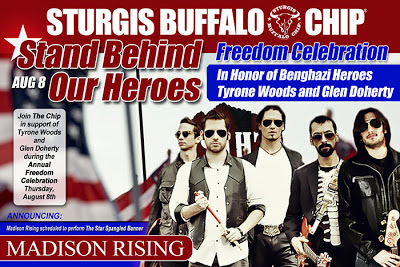 Sturgis, South Dakota (July 2, 2013) – The Sturgis Buffalo Chip has chosen to honor retired Navy SEAL Tyrone Woods and former Navy SEAL Glen Doherty for the heroic patriotism and courage shown in Benghazi, where they sacrificed their lives while  saving the lives of many others.  Members of their family will be present on the Buffalo Chip’s main stage to accept the honors to be presented during the Buffalo Chip’s 22nd annual Freedom Celebration on Thursday, August 8th.


The presentation will be emceed by Larry Bailey, CAPT. (SEAL), USN (Ret.), representing Special Operations Speaks.  He will be joined by an Honor Guard and numerous decorated warriors as honors are presented to the honorees’ families, represented by Glen’s brother, Greg Doherty and Tyrone’s wife, Dorothy Narvaez Woods.

“We’ve been privileged over the years to offer tributes to many deserving heroes, but we could never be more proud of and more touched by the brave and selfless actions of Tyrone Woods and Glen Doherty,” says Rod Woodruff, president of the Sturgis Buffalo Chip. “These heroic former soldiers gave their lives to protect other Americans who otherwise would have perished during the terrorist attacks on the American diplomatic mission in Benghazi.  Their courageous actions must not be forgotten.”

The public is invited to pay their respects throughout the Sturgis Rally at the American Veterans Traveling Tribute that includes an 80% replica of the Vietnam Veterans’ Memorial (the Wall), and other memorials to those who have given their lives in each of the wars and armed conflicts the United States has been involved in.  These are located amidst the Buffalo Chip’s Field of Flags, a majestic display of hundreds of proudly waving American flags.   Access to the Field of Flags and memorials is free and open to the public.

The Freedom Celebration will continue into the night with Thursday’s sensational music line up. The patriotic performance by Madison Rising with their rock rendition of the Star Spangled Banner will be followed by commanding performances from both Brantley Gilbert and Lynyrd Skynyrd. 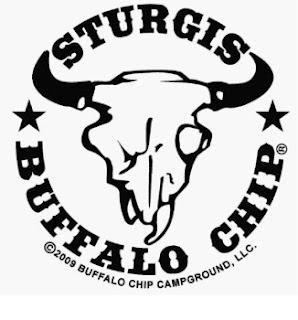