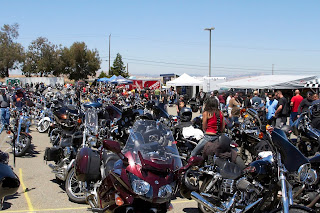 Hollister, CA- It’s 6:00am on Saturday July 5th and the day starts with beautiful weather…sun out slight breeze, blue skies. The kind of weather riders dream of. Everything was in place…hundreds of  vendors had their displays set up on Corbin’s property as well as downtown and all over Hollister for that fact. As the sun started rising up over the horizon, you can hear the gentle rumble of bikes off in the distance getting closer until the town and Corbin’s property were swarmed on by 60,000 riders for the re-birth of the Hollister Rally. Thousands showed up from all over the country to attend this event as well as Corbin’s 4th Annual Rider Appreciation Day. In 24 short hours, Hollister with a population of 35,437 grew to almost triple its size, all sharing the same common interest…motorcycles.


Mike Corbin, The “Idea Guy” at Corbin was a major supporter in getting this rally back on the books and would like to personally thank Hollister’s new Mayor Ignatio Velazquez, Robbie Scattini, Vice Mayor, who has been a long time rally advocate, all of the City Council Members, Mark Cresswell, president of Worldwide Dynamics, the event organizer and David Westrick, Hollister’s Police Chief for all of their hard work. Police Chief Westrick gave the City Council a very reasonable budget for public safety, which gave the City Council a way to see break even. “If it wasn’t for the diligent efforts made by David Westrick in bringing this event in under budget for the security portion, this rally wouldn’t have taken place”, Corbin stated. 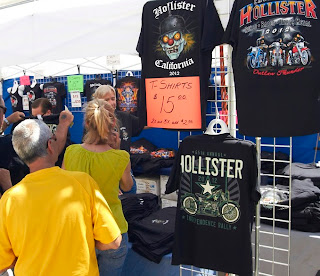 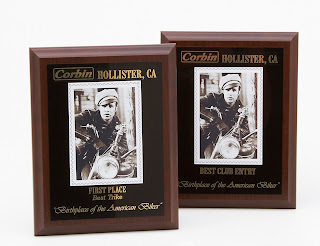 There was plenty to do, hear, eat and see at Corbin’s. There was non-stop live rock and roll music throughout the day which provided a nice touch while strolling around and checking out the products offered from the different venders. Sonny Barger, an American Legend and founding member (1957) of the Oakland, California, U.S. chapter of the Hells Angels Motorcycle Club and the original rally visionary, was on hand to support his good friend and fellow HA Brother Phil Cross. Phil was promoting and signing copies of his hot off the press book “Gypsy Joker to A Hells Angel”. The Discovery Channel’s Two-Time Biker Build-Off Champion Matt Hotch was also on hand as well as custom bike builder icon Arlen Ness, Ron Simms, the outlaw custom bike builder from the Bay area, Cole Foster, custom bike and car extraordinaire and Craig Vetter, inventor of Windjammer Fairing and lifelong contributing inventor of motorcycling.

Biker Bob emceed the bike show and once again did an incredible job entertaining the crowd. There were lots of jaw dropping customs to drool over and there were 9 different class winners as well as the Grand Prize winner, Jim Carducci, who won a feature photoshoot and article with IronWorks Magazine.
This year, attendees found motorcycle-only parking filling downtown Hollister with side streets devoted to a wide variety of rally vendors. Two large entertainment areas downtown offered live entertainment…There was a total of 30 different bands playing on 3 different stages throughout the weekend. And if you were thirsty, you could enjoy an ice cold beer at one of the local beer gardens. On Saturday, center lane parking on the main drag was occupied by Hollister’s official bike show which is a part of the World Championship of Bike Building. Various motorcycle manufacturers were on hand offering demo rides making downtown extremely busy and fun.

Riders received an enthusiastic welcome back from local businesses, eateries and taverns for the Re-Birth of Hollister. Riders also found that there is excellent scenic riding, wine tours and a summer concert series at a local vineyard's outdoor amphitheater.

There was a constant flow of praise at the city council meeting on Monday, July 8th immediately following the event where folks turned out to voice their gratitude to the city, organizers and police department. The City Council is now starting to look at a five year approval for the Rally. Mark Cresswell, President of Worldwide Dynamics, recently signed a five year agreement with Hollister’s Downtown Association, subject to approval by the City Council. Mark has just leased an office building in downtown Hollister that will serve as the “unofficial” rally headquarters. The City Council will have final approval of choosing the next event management company. “When the 2013 Rally was taking on life, we had all agreed to work together and communicate. This was extremely helpful in the success of this year’s rally and should become a management discipline” Corbin stated. Rally management should answer to the Hollister City council and should work together on a year round basis with continued planning and development. “I am proud to be a member of this rally team”, added Corbin.

Mike Corbin sends his personal thanks to the thousands of riders that showed up for supporting Corbin in their efforts to keep Independence Day alive in Hollister. “I promise you next year will be even bigger and better so plan ahead and you may be surprised to hear that we’re considering making this a 3 day event”, Mike stated. "Anyone that didn’t have a motel reservation this year got stuck staying “far outside” of Hollister...You couldn’t find a vacant motel room for 100 miles so planning ahead is a good idea for next year. And if you plan on displaying next year at our show, we encourage you to get in your vender information because it’s first come, first serve”, Corbin concluded.

Corbin was running free factory tours throughout the day and offered a 10% event discount and free installation to everyone that attended the rally which caused a traffic jam of bikes getting custom seats tailor made to fit their bikes and bodies. All in all, everyone thoroughly enjoyed themselves and I for one am looking forward to attending Hollister and Corbin for years to come.
For those interested in obtaining more information on Corbin, you can reach them at 800-538-7035 or online at www.corbin.com. Visit Corbin Headquarters at 2360 Technology Parkway, Hollister, CA. 95023 or Corbin Florida at 1433 US Highway 1, Ormond Beach, FL 32174.