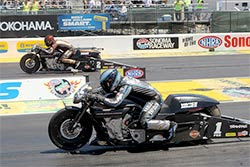 Unfortunately for the team, their order in qualifying meant that Hines and Krawiec faced off against each other in the first round on Sunday, losing the chance to get race runs and valuable data with the team's new two-valve V-Twin engine. Because Hines lost that first-round race, he also missed an opportunity to move closer to the top 10 in points and qualify for the Countdown to the Championship playoffs later this season.


Krawiec qualified in eighth position for Sunday eliminations with an Elapsed Time (ET) of 6.898 seconds. Hines qualified ninth just a tick behind at 6.899 seconds. Viper Motorcycle Company Buell rider Matt Smith led all qualifiers with a 6.838-second run. Krawiec faced Smith in the second round on Sunday and had a quicker ET (6.842 to 6.843) but Smith left the line first and got the win on a holeshot. Smith lost in the final round to Lucas Oil Buell rider Hector Arana Jr., who won his fourth event of the season.

"It's good we found some performance [this weekend], and I think I had a bike that could have won in the second round," said Krawiec. "We just have to stay focused. We still have Indy and before that a few weeks off to do some testing and find more power. It's our home track and we don't have to travel, so that will maximize the time we have available to get ready."

Hines will need some luck and a boost in performance to qualify for the Countdown to the Championship playoffs, which is set after the U.S. Nationals in Indianapolis in August.

"I might need to win it all at Indy to make the Countdown," said Hines who is currently in 12th place in the standings. "It's been an R&D year for us, and we are still down about two miles per hour on the fastest bikes."

The Pro Stock Motorcycles will next race August 28 to September 2 at the 59th annual Chevrolet Performance U.S. Nationals at Lucas Oil Raceway in Indianapolis, Ind.