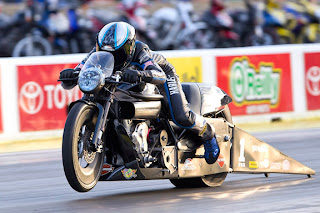 Batteries at Route 66 Raceway. Both riders were eliminated in the first round as the team continues to seek performance improvements from its new two-valve V-Twin engine.


"We are trying to maintain the pace of a very competitive field of Pro Stock motorcycles," said Krawiec, the defending class champion. "We're still hunting for the right set-up with the new engine. I guess the good news is that I went quicker with each run this weekend, and even though I lost in the first round on Sunday it was my best pass of the event. We keep making runs and collecting data we can use to get us over the performance hump and back to the top of the field."

The first Friday qualifying session was rained out. Hines posted a best run on Saturday of 7.037 seconds that placed him 15th in the field. Krawiec qualified 16th in the 16-rider field at 7.038 seconds. Viper Motorcycle Company Buell rider Matt Smith led all qualifiers with an Elapsed Time (ET) of 6.908 seconds. 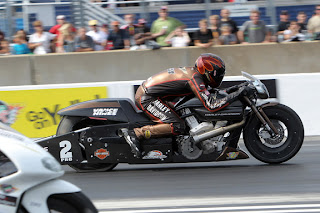 On Sunday, Krawiec had a good start and an ET of 7.000 seconds but lost to Smith (6.930 seconds). Hines fouled at the start, leaving the line 0.013 second early to hand a win to Scotty Pollacheck on the Sovereign-Star Racing Buell.

"I had to go for an exceptional start in the first round and left just a little early," said Hines. "We remain disappointed with our performance so far this season. It's just going to take some time and more testing."

In the final, Smith lost to Sovereign-Star Racing Buell rider Michael Ray, who won his second event of the season.

After six rounds of Pro Stock Motorcycle competition in the 2013 NHRA Mello Yello Drag Racing Series, Lucas Oil Buell rider Hector Arana Jr., who lost to Ray in the semi-finals on Sunday, remains atop the class with 526 points. Ray moves up to second place with 457 points, followed by Lucas Oil Buell rider Hector Arana Sr. in third place with 408 points, Viper Motorcycle Company Buell rider John Hall with 392 points, and Smith with 373 points in fifth place. Krawiec is in eighth place with 288 points. Hines is 12th with 242 points.