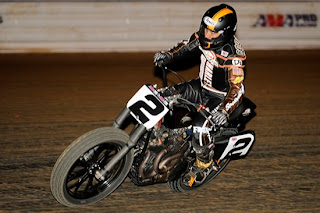 
Coolbeth qualified for the main with a close win over Kawasaki rider Jake Shoemaker in the third 10-lap heat race. The pair battled for most of the heat before Coolbeth prevailed by 0.031 seconds. Coolbeth finished fifth in the four-lap Dash for Cash bonus sprint, which was also won by Baker.
R&J Racing rider Doug Lawrence put his Harley-Davidson XR750 on the pole for the 25-lap main, but it was Baker who jumped the field off the starting line and immediately opened a lead that would never be challenged. After 10 laps Baker led by more than three seconds, almost the full length of one straight on the track. Coolbeth joined a pack that included Lawrence, Crosley Radio rider Bryan Smith, White’s H-D/South East H-D rider Sammy Halbert, Shoemaker and Burnett Farms Racing rider JD Beach, but those racers gradually strung out behind Baker. Coolbeth slipped to eighth place on lap 10 and held that position between Zanotti Racing/Schaeffer's H-D rider Jake Johnson and the Harley-Davidson motorcycle of Lloyd Brothers Motorsports rider Henry Wiles. Baker led Shoemaker across the finish line by 6.778 seconds. Smith was third, followed by Lawrence, Halbert and Beach. Johnson finished seventh, 2.033 seconds ahead of Coolbeth.

“After the last two races were rained out, it was great just to get out on the track,” said Coolbeth. “I’ve had some good races in the past at Hagerstown, but tonight I thought they prepped the track a little drier than usual for the main, and it didn’t match the set-up on our Harley-Davidson. I got a good start but then faded back. This series is so competitive right now that it’s hard to overcome even a minor mistake. But it is great to see these young riders out there keeping the pressure on the veterans.”

Baker, the 20-year-old rider from Dryad, Washington, who rode as a substitute on the Harley-Davidson Factory Team last year while Coolbeth was injured, leaves Hagerstown with his first Grand National victory and the Twins class points lead. Baker is pacing the series with 77 points. Brandon Robinson, who placed 17th at Hagerstown, is in a three-way tie for second place with Wiles and Johnson, who each have 57 points. Coolbeth is in fifth place with 47 points, followed by Halbert with 44 points and Smith in seventh place with 42 points.

The next race on the AMA Grand National Twins schedule is July 20 on the Grays Harbor County Fairgrounds Raceway half-mile in Elma, Washington.