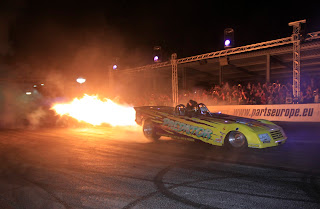 Can Germans have fun? You bet they can! Bike and Music Weekend at Geiselwind has proved just that since 17 years - and for 11 years at the superb Truck-Stop of Anton Strohofer at Geiselwind/Germany! Top Stunt-, Bikeshow, Dragster- and Burnout-Action plus live-music in- and outdoors make this event „weatherproof“ and always new and hot! 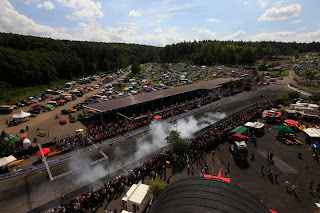 What is a “burnout”? The most technical and precise description would be: “The rotational movement of a rubber surface (in most cases a tire...) on a static ground, in case of performing a successful b., mainly tarmac, concrete or other solid matters that won’t give way when under frictional stress, for the reason of transforming the rubber directly into rubber vapour as a form of entertainment”. Or something like that? Almost immedeately after the combustion engine became strong enough to spin a rubber tire beyond the needed adhesion to move a car or motorcycle forward, “burnouts” became a popular trademark to start moving: There is rarely a movie where the speeding car or motorcycle is not running away with screaming smoking tires – and this dates back to times when the then cinema’s silent movies still were underlined by piano! Setting aside burning tires during street-riots all over the 3rd World (and sometimes France and greece, for that matter...), there is one event where you can see the biggest variety of “how-to-burn-rubber” in its most artistic form: The Bike and Music Weekend at Geiselwind/Germany! 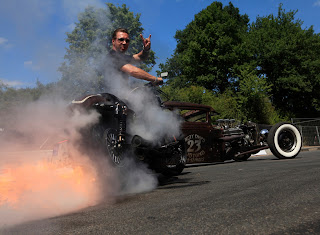 In Germany, there is little need to explain the Bike and Music Weekend at Geiselwind: Ever since its conception in 2002 at the current event-site, the Bike and Music Weekend became one of the main german motorcycle-events of germany. A 4-day program of Dragstershows, Burnouts, Motorcycle-Stunts, live-music and action has been refined year after year. In 2013, the event will celebrate its 18th anniversary and 2013 also marks the 12th annual at Geiselwind Truck Stop. The 2013 show will feature several professional Stunt-Shows, including Harley-Davidson Stunt rider Rainer Schwarz and Portugals  Stunt Ace Ricardo Domingos, who is doing stunts on a variety of vehicles! 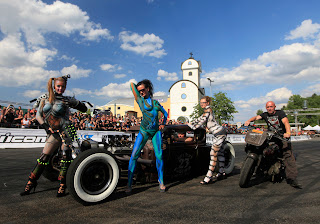 There is always something new and exciting at the Bike & Music Weekend, but the traditional parts as the Stunt-, Dragster-, Burnout, Custombike- and US-Car Shows always allow the audience to participate and become part of the fun. The visitors can join the Bike- and Car-shows, the Burnout contests and a lot of other activities that are going on on – like Demo Rides by Harley-Davidson and other motorcycle brands. “Basically, we organize the event like we would have it when we visit a motorcycle party”, says Thomas “Rosti” Voll, well known german Buell and V-Rod Customizer, owner of RRC Customizing and member of the Knight Riders, the franconian Motorcycle Club that helps organising and securing the annual “Bike and Music Weekend” at Geiselwind, “we always want to give our visitors something special, the little extra over the top”!
No less than 15 top music acts will perform in the concert hall and on the outdoor stage. This years headliner will be GOTTHARD from Switzerland, supported with even more „heavy metal“ by „Crematory“ and „Justice“. US Car show and Bikeshow will attract superb rides and the crazy „Burnout-Contest“ presents ordinary cars and bikes PLUS vehicles which are specially purpose-built just for this reason: To burn rubber in the most spectacular fashion! Camping on-site and short ways are a tradition at Geiselwind, which hosts concerts and events almost every weekend. But get a warning: This event is HIGHLY ADDICTIVE! You may BURN SOME RUBBER – and you will feel the urge to come back every year! 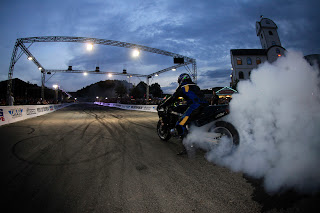 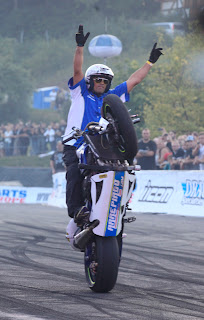