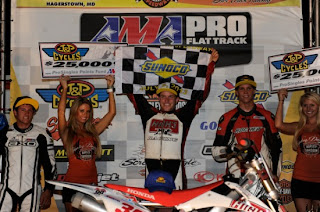 It was three years in the making, but Brad Baker finally broke through to earn his first career win in the AMA Pro Flat Track presented by J&P Cycles Grand National Championship Main Event Saturday night on the Hagerstown (Md.) Half-Mile. Baker, the 2011 Rookie of the Year, made no secret about his desire to finally earn that first win and what a performance it was. Riding his Dodge Brothers Harley-Davidson XR750, Baker pulled away from the Kawasakis of Jake Shoemaker and Bryan Smith to win by a big margin of 6.778 in the most dominating performance of the season so far.

The victory – combined with a main event crash by former series leader Brandon Robinson – means that Baker is the new series leader. After his Hagerstown win Baker now leads the championship now by 20 points (77-57) over Robinson, Henry Wiles and Jake Johnson, who are in a three-way tie for second after four rounds of the series.

For Baker, Hagerstown was a magical night where the young rider from Eatonville, Wash., never put a wheel wrong. Going into the final Baker had won the fastest Heat race to earn the pole, and scored victory in the Dash for Cash, which pits the top six qualifiers in a special four-lap shootout. So he was supremely confident going into the final, but Baker has been in that position before only to have mechanical problems or another rider find a better setup for the main event. But nothing was stopping Baker on this night. He took the lead going into the first turn and never looked back, pulling away to a massive lead by the checkered flag. 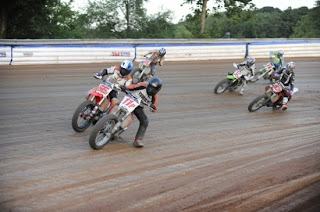 “Oh man this feels amazing,” Baker said of his first Grand National win. “I haven’t been in the game very long as far as an expert goes – three years – but it just feels like it’s taken forever to get to this point. I’ve been so close so many times. This was the most comfortable I’ve been on a bike in a long time when it comes to a clay Half-Mile. It was a lot of fun. Everybody’s been asking me ‘Brad, when are you going to get your first win? Is it going to be this weekend?’ And man I finally got it out of the way. So it feels great.”

It was a night of surprises at Hagerstown, not only for Baker’s first win, but for the performance of rookie Jake Shoemaker as well. Shoemaker, who also qualified for Hagerstown last year as a provisional expert, showed no respect to the series veterans as he raced home to a solid second marking his first Grand National podium result. Shoemaker was simply hoping to make the main, but as the night wore on he kept adjusting his goals.

“I started by coming here and wanting to make the main event, like I did last year,” Shoemaker said. “Then I made the main and made the Dash and I thought top 10 would be good, top five would be sweet and a podium would be amazing. Here I am on the podium, so no complaints there. It was awesome sitting there in second the whole race, but it was also the most boring race because I rode by myself for 25 laps.”

To keep up with the latest series news visit www.amaproracing.com/ft/. Ticket information for Springfield can be found at www.illinoismda.com/ or call (217) 753-8866.