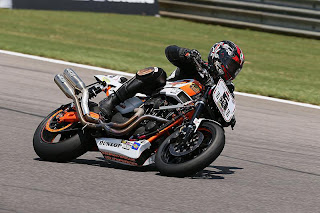 MILWAUKEE, WI. – Suburban Motors Harley-Davidson’s Steve Rapp took a convincing win in the third round of the 2013 AMA Pro Vance & Hines Harley-Davidson series at Barber Motorsports Park, in Birmingham, Ala., to earn his second consecutive victory of the season.

Despite missing the first practice session of the weekend, Rapp, a fulltime airline pilot who often flies to races on late notice, qualified on the front row next to series leader and polesitter Michael Barnes (Spyke’s H-D), the defending series champion, who led the first lap of the 11-lap contest and kept the pressure on Rapp after he claimed the lead on the second lap. Barnes and Rapp circulated nose-to-tail within a second of each other for the first half of the race, but by the seventh lap, Rapp had extended his gap over Barnes to just over one second and eventually built it into a 5.454-second victory margin. 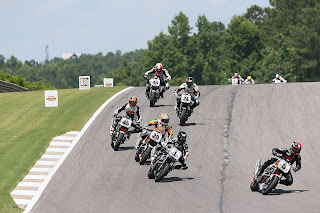 “From the first time I rode the bike, there’s just something about it. The way [the guys from Suburban Motors Harley-Davidson] have it set up and the special things they’ve done for me as a rider, like handlebars and the seat and stuff like that, it just feels so good. I feel like I can ride it a lot harder,” Rapp said. “I started the season with really nothing going on and Joe [Houpt] from Suburban Harley called me and said if I wanted to come out for Daytona we’d at least get one race in. I said 'that'd be great' and it’s just kept getting better.”

With his second place finish, Barnes maintained the series points lead by a slim one-point margin, but the most exciting action on the track was for the third step of the podium. That battle was won by Tyler O’Hara (Eco Fuel Saver/Scrubblade) on the last lap, who nipped Suburban Motors H-D’s Benny Carlson by a 0.017-second margin to also take over third place in the points standings.