Rukka parent company L-Fashion
awarded by the President of Finland


President of the Republic of Finland Sauli Niinistö has presented the prestigious “Internationalization Award” to L-Fashion Group. 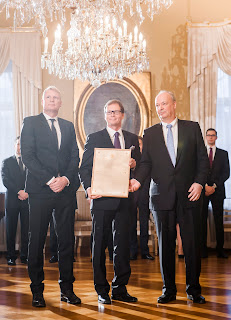 The “Internationalization Award”, which is now being granted for the 45th time, is conferred annually on Finnish companies or communities that have been exceptionally successful in the international market, have been growing profitably, have developed Finnish expertise and operate in an environmentally sustainable manner. President Sauli Niinistö has presented the “2012 Internationalization Award” to Vesa Luhtanen, Chief Executive Officer, Pauli Kulvik, Chairman of the Supervising Board, and Juha Luhtanen, Sales Director of L-Fashion, during an official ceremony in Helsinki on January 31st.


In his commemorative speech, Sauli Niinistö emphasized that L-Fashion Group’s journey to becoming Finland’s largest and most internationally successful fashion company is proof of its continuity and adaptability. In his acceptance speech, Vesa Luhtanen explained: “Product quality, design and price all have to be right if you want international success in the fashion business. Finding the right combination for success requires constant deliberation and close monitoring of consumer requests.”

The “Internationalization Award” represents the culmination of a long list of prizes and awards conferred on Rukka and L-Fashion such as the “Kaj Franck Design Prize” (2012), the “Finnish Designer Award” (2011), the “Avantex Innovation Prize“ (2007), the “Fennia Prize” (2003) and the “Golden Hanger Award” (2001).