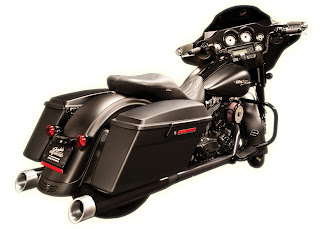 We feel that we can draw from their 30+ years of “product branding” experience in the motorcycle industry as well as the many contacts that they have established over the years. “We feel confident in this first series of moves that will take our business forward and we look forward to working with V-Twin Marketing on our new line of exhaust systems.”

The last 12 years for MGS Custom Bikes have not been without trials and tribulations, to say the least. Throughout those years, MGS won some of the most highly esteemed shows in the motorcycle industry, such as: The Grand National Roadster Show for the title of America's Most Beautiful Motorcycle; The Rat's Hole in Florida; Discovery Channel's Bike Build Off, just to name a few. MGS has also been on the cover of every major motorcycle magazine as well as countless features inside. Mike also had a brief relationship with the guys from OCC and used to build their exhaust pipes, including those crazy exhaust pipes that look like a fire hose.


Mike's ability to transform from completely custom bike building to creating custom parts and accessories for the stock Harleys is really the reason MGS Custom Bikes is one of the only remaining shops still around. One would think that this kind of notoriety would bring success. Mike found out just like hundreds of other custom bike builders that when the housing market went south, so did the need for $80,000 motorcycles so Mike started on his latest project…to build a set of high performance bagger exhaust pipes. Some years back MGS purchased a Dyno, and through the process of tuning bikes, they have created a custom line of fine-tuned exhaust systems that outperforms and, of course, out styles any other aftermarket exhaust system.


Over a year of extensive research and development went into these pipes and Mike far exceeded his goal. MGS Custom bikes’ new exhaust systems do INCREASE horsepower…PERIOD! (Independent studies and dyno results are available upon request) Chris Stafford, VP of Marketing stated, “We are working with V-Twin Marketing on a variety of projects including an aggressive PR campaign to get the word out to the masses on our new exhaust systems.” “Riders will be shocked at their horsepower gains the second they install a set of our new True Duals,” Chris added.


Rick Raus, owner of V-Twin Marketing was very excited to have landed this account and said, “I’ve had the utmost respect for Mike and his uncanny ability to produce award winning custom bikes. I know that he’s a perfectionist with everything he touches and his new line of exhaust systems is no exception.”  I look forward to working with Mike and Chris on their new exhaust line”, Raus concluded.
For those interested in obtaining more information on MGS Custom Bikes, you can reach them at 661-951-9878, call Chris Stafford directly at 661-750-2424, email them at sales@MGSCustomBikes.com or check them out online at www.MGSBikes.com.