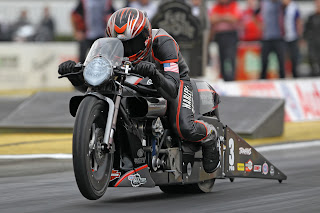 
Krawiec was able to celebrate winning his third Pro Stock Motorcycle championship on Saturday. By qualifying his Harley V-Rod in second position for Sunday eliminations, the 35-year-old rider from Englishtown, N.J., secured enough points to lock up the 2012 title.


“This has been such a great season,” said Krawiec, who previously won the championship in 2011 and 2008. “When I reflect on the way it went, to make 11 final rounds and get nine wins, and have the Harley-Davidson team win 13 in a row, it’s really unbelievable. And there’s the highlight of getting a win at home in Englishtown, the biggest win of all for me. I’m sure my smile will get wider in the next few days as it all soaks in.” 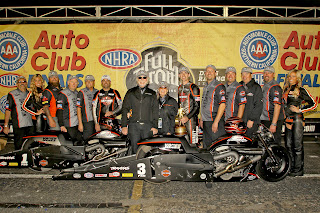 Hines had a hot hand and a very fast Harley V-Rod all weekend at Pomona. He set the low Elapsed Time (ET) in eight consecutive rounds, including a track-record 6.809-second blast in the final round of qualifying to bump Krawiec (6.811 ET) off the pole. On Sunday, Hines advanced to the final round with wins over Kosman Special Buell rider James Surber, Suzuki rider Steve Johnson, and Matt Smith on the Viper Motorcycle Company Buell. Krawiec scored a win over MB Precision/LAT Racing Buell rider Mike Berry in round one, and got an automatic win in round two when Geico Suzuki rider Karen Stoffer fouled at the start. Krawiec defeated ZLOOP Suzuki rider LE Tonglet in the semi-finals.
In the final, Hines powered past his teammate, winning with a 6.766 ET to re-set the track record and also record the best top speed of the event at 198.29 mph. Krawiec’s 6.805 ET was his best of the day.


“This is almost identical to last year – I win the race and Eddie wins the championship,” said Hines, who now has 31 career victories. “Any other year my record would have won another title. Really, it’s always a team deal for us. It was tough to miss having a perfect season by one race, but after we didn’t make the final in Dallas I think the Harley team refocused and battled back. It was time to start another streak. All the guys do a phenomenal job building and tuning these bikes. And this weekend there was no stopping my V-Rod. It was on a mission and I’m glad I was on it. We are going to have a lot of work to do this off season, designing an engine for the new rules, but we can look back on 2012 with a lot of satisfaction.” 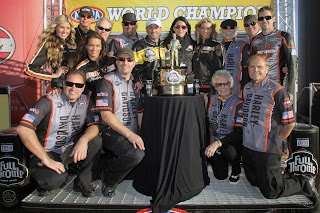