The premise was simple and the results better than imagined, but the first HOT ROD swimsuit issue (Apr. '87) created major chaos before ever making it onto the newsstand. 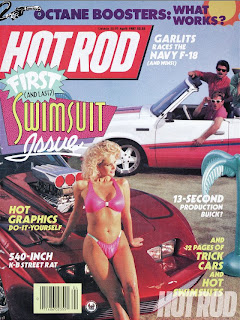 Pat Ganahl had just become editor and needed a wow! cover to kick up the numbers. HOT ROD's April issue had always been the victim of shenanigans in the April fool's spirit. Sports Illustrated was having huge success and getting a lot of publicity with its swimsuit issues, so why not a whole issue riffing on SI? This could be fun. Immediately, the drama began. Ganahl had to run the idea up the Petersen Publishing approval ladder. First was Ganahl's boss: John Dianna, who required a lot of arm-twisting. It was eventually agreed that if it worked for SI, it could work for HOT ROD. Approved!

At a subsequent meeting, the corporate suits were informed of the idea. Their reaction was incredulity mixed with anger. Dianna disavowed any knowledge of the idea. Ganahl was stunned. After gaining his composure, he convinced Vice President Fred Waingrow this would ratchet up the numbers, but figured the Veep probably knew that anyway. The swimsuit shenanigans were on. Again. Ganahl wanted just the right girls, professional makeup, swimsuit companies contributing their newest lines, and let's not forget the best hot rods around. He hired Randy Lorentzen--HOT ROD's former director of photography--to pick out the models, locations, and even some of the cars. 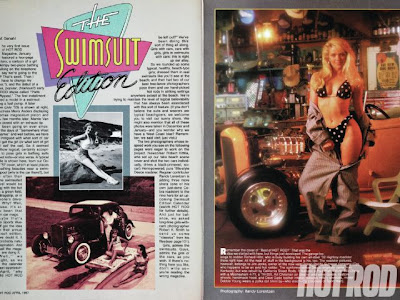 But here's where the stories diverge. Says Ganahl, "At the time, then-director of photography Bob D'Olivo was pissed at Lorentzen." D'Olivo wouldn't allow Lorentzen in the HOT ROD photo studio. Ganahl's solution was to have Lorentzen shoot the swimsuit features away from the HOT ROD digs and hire Robert Kittila for the in-studio cover, which included coming up with the cover model and cars. Lorentzen remembers it differently: "I shot a cover, but not the cover that ended up being the cover." Lorentzen later got an irate Dianna phone call demanding he return to the offices.
Once back at the HOT ROD farm, Dianna wanted to know why the cover was shot with guys in the bed of a truck doing obscene things? Lorentzen had never seen this cover before. Dianna was vibrating. Lorentzen denied any knowledge of the mystery cover. Lorentzen continues, "Dianna is so fired up, he tells me he's going to fire Pat. I didn't want to be in the middle--I was and still am--friends with the guy. I told Dianna I didn't want to be responsible for nailing Pat's coffin. Dianna says, 'You just shoved the last nail in, that's all.'" Eventually, Publisher Harry Hibler conceived a compromise wherein the Kittila cover was cropped to lessen some of the imagined objectionable innuendo. The first HOT ROD swimsuit issue was saved. Barely.


And the backwash to this madness? Quite a lot, actually. The swimsuit issue sold more than 100,000 more copies than any other issue that year, photographer Lorentzen subsequently met cover model Stevie Sterling and they were later married (and still are!), nearly every magazine at Petersen Publishing did swimsuit issues to increase sales, and Editor Pat Ganahl was demoted. (But not for the swimsuit issue, according to Ganahl.) We'll save that story for another Where It All Began.
(Source: Hot Rod Magazine)