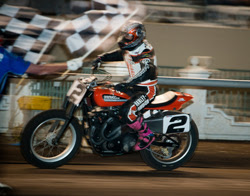 It was the second win of the season for Coolbeth. Rogers Racing/Blue Springs Harley-Davidson rider Jared Mees finished eighth and claimed his first AMA Grand National championship.
Coolbeth and his Harley-Davidson XR750 were fast all night at Pomona, winning a heat race and then leading each of the 25 laps in the main event. Coolbeth finished 8.560 seconds ahead of Dodge Brothers/Perry’s Harley-Davidson rider Brad Baker. Crosley Radio Kawasaki rider Bryan Smith finished third, just 0.144 seconds behind Baker. Robert Pearson was fourth on the Bumpus Harley-Davidson/Memphis Shades XR750.


It was a satisfying end to the season for Coolbeth, a three-time Grand National champion who missed two Twins races in 2012 after breaking his leg on June 30 in a race at Lima, Ohio.
“After our up-and-down year, this win is a great way to go into the off-season,” said Coolbeth. “We had my injury, and then we won a race but didn’t run well after that. Today we struggled in practice but then found a good set-up. Now we can go through the winter knowing we can win and be a force next season.”


Mees arrived at Pomona with a 12-point lead over South East Harley-Davidson rider Sammy Halbert in the chase for the 2012 series championship, with defending champion Jake Johnson on the Zanotti Racing/Schaeffer`s Harley-Davison entry 20 points back. All three racers had an off night at Pomona. Mees and Halbert came together early in the race, but Halbert later dropped back with a clutch issue. Mees spent the rest of the race getting his Harley-Davidson safely across the finish line to secure his first championship. Halbert finished 13th. Johnson was 14th.
“The feeling hasn’t really sunk in yet,” said the 26-year-old Mees, who had one race win in 2012. “So much hard work and dedication has gone into this season and it all paid off. I kind of knew where I was at the whole way and was able to bring it home. I really have to thank my team and sponsors for all of their support this year; this was a great team effort.”


Mees wrapped up the AMA Pro Harley-Davidson Insurance Grand National Championship season with 291 points. Halbert was second with 278 points, followed by Johnson with 265 points. Smith was fourth with 228 points, followed by Baker with 196. Coolbeth finished the season in seventh place with 159 points.