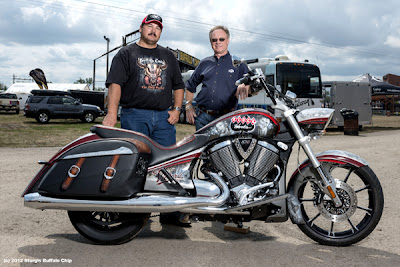 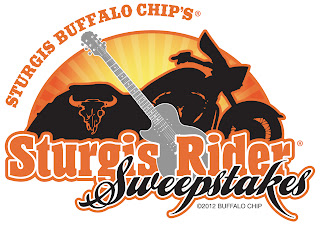 The capacity crowd in the Buffalo Chip’s natural amphitheater was treated to an exciting night when the 8 finalists of the Sturgis Rider® Sweepstakes took the stage to cheers from the audience. One name was drawn at random from the list of finalists. The winner was Mr. Ian Sherwood of Wood, SD. Mr. Sherwood, an avid motorcycle enthusiast, had earned his randomly chosen spot in the finals by registering for the Sturgis Rider® Sweepstakes. This year’s sweepstakes registration was collected online at www.BuffaloChip.com, live at the Gibson tour bus at The Chip during the Sturgis Motorcycle Rally, and via QR code scans that were available on Pepsi cans and at in-store promotions leading up to the rally.
The Sturgis Rider® Sweepstakes prize package included a one of a kind custom Victory Cross Roads motorcycle named “Kountry Wild” by Klock Werks Kustom Cycles. The one of a kind creation featured Renegade wheels, high output Kicker sound system, hand tooled leather from Duane Ballard of DB Leather, detailed paint and airbrush work by Darren Wenzel of Gasoline Art,  floorboards from Strokers Dallas and fenders, handlebars and fabrication by Brain Klock of Klock Werks.  Also included in the prize package was a custom Buffalo Chip Epiphone Coronet guitar. Introduced in the early 1980s, the Epiphone Coronet remains a favorite with musicians today. Both the bike and guitar are custom classics that will help commemorate Ian Sherwood’s 2012 journey to the Black Hills and the Sturgis Buffalo Chip®. 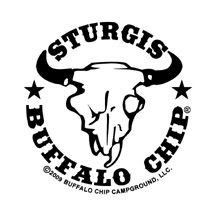