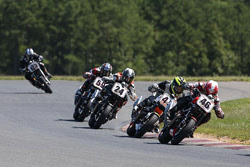 MILWAUKEE - Shane Narbonne (Teterboro Rams LLC) emerged victorious at the end of a frenetic last lap Sunday to claim his first AMA Pro road racing victory in the Vance & Hines XR1200 series race at New Jersey Motorsports Park, but it was a late crash by championship contender Kyle Wyman that really shook up the series standings with just two races to go in the 2012 season.

A seven-rider pack battled for the lead throughout the 12-lap race, with XR Showdown contenders Wyman (KLR Group/Spyke’s H-D), Tyler O’Hara (Bartels’ H-D/Scrubblade), Benjamin Carlson (Suburban Motors H-D) and polesitter Michael Barnes (KLR Group/Spyke’s H-D) in the mix along with Narbonne, Jake Holden (MOB Racing) and Travis Wyman (Harv’s H-D). Just when Kyle Wyman appeared to be perfectly positioned to make a late drafting pass on Narbonne on the final lap to claim his fifth win of the season, he fell victim to a vicious high-side crash just before the main straight that ended his race in spectacular fashion.


“That’s the worst wreck I’ve ever had and maybe one of the worst I’ve ever even seen,” Wyman said. “The rear tire folded. That just never, ever happens. I just can’t believe this is the outcome.”


Wyman’s misfortune opened the door not only for Narbonne to claim his first career AMA Pro victory, but also threw the race for the XR Showdown wide open, with the top four riders in the standings now separated by only four points with two races remaining in the season.


“I didn’t even really know what lap it was, I just went to the front. I didn’t see the white flag, I just went,” said Narbonne. “It’s good to win at my home track. I’ve been working hard for this.”


As the highest placed finisher among the championship contenders, Barnes may have been the biggest beneficiary of his KLR Group teammate’s misfortune, as he jumped to fourth in the Showdown standings and narrowed his point gap to leader Carlson to four points.


“What a battle,” Barnes said. “So much passing going on and I even lost track of the laps for a minute. I dropped back to sixth at the start of the last lap. I caught Holden pretty quick and just put my head down. When Kyle wrecked it opened a door. I was in fifth place and had a little more time to assess the situation in front of me. Benny and Tyler had to jump on their brakes sooner. That gave me the momentum to get past them.”