KRAWIEC AND HINES TAKE HARLEY TO SEMI-FINALS AT DALLAS

KRAWIEC AND HINES TAKE HARLEY TO SEMI-FINALS AT DALLAS 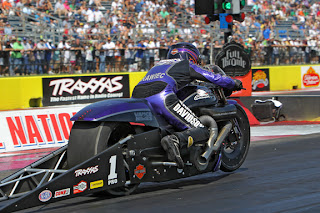 Milwaukee – Harley-Davidson® Screamin’ Eagle®/Vance & Hines rider Ed Krawiec leads the Pro Stock Motorcycle points standings after advancing to the semi-final round of eliminations at the AAA Texas NHRA Fall Nationals at the Texas Motorplex, the second event in the six-race Full Throttle Countdown to the Championship playoffs. Krawiec has an 11-point lead over his teammate, Andrew Hines, who also advanced to the semi-finals at the Texas event. Michael Ray defeated Karen Stoffer in the final, the first of the season not to feature at least one of the Harley-Davidson Screamin’ Eagle riders, as the team’s winning streak came to end after 13 consecutive NHRA events dating back to 2011.

“It’s been almost a calendar year since there wasn’t a Harley-Davidson® V-Rod® rider on the winner’s podium,” said Hines. “We can look back on this streak with pride. We may never do it again, but it’s a string of success we will always remember.” 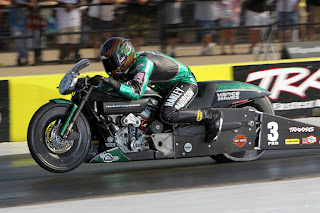 Hines defeated the Steve Johnson Suzuki and MB Precision/LAT Racing Oil Buell rider Mike Berry in the first two rounds of Sunday eliminations before losing to Ray on the Viper Motorcycle Company Buell in the third round.


Krawiec got wins over PiranaZ Racing Buell rider Shawn Gann and ZLOOP Suzuki rider LE Tonglet in the first two rounds, and then lost to Geico Suzuki rider Stoffer on a holeshot in the third round.


“Both of our V-Rods really fell off in performance between the second and third rounds,” said Krawiec. “We’ve had that happen at this track in the past, as the temperature goes up and the track surface starts to get a little greasy. I’m not sure why. We knew the win streak would end eventually. It’s more important that we gained points on our two closest rivals in the Countdown.”


As a result of bonus points earned during qualifying, Krawiec gained a single point on Hines over the weekend, and is now up by 11 with 2295 points. Hines is second with 2284 points. Hector Arana Jr., who lost on a red light in the second round at Texas, is third with 2216 points and drops from 64 to 79 points behind Krawiec. Ray, who won the first National event of his career at Texas, jumps to fourth place with 2187 points. Lucas Oil Buell rider Hector Arana Sr., who broke at the starting line in the first round, drops to fifth place with 2185 points. Stoffer is sixth with 2175 points.


The Pro Stock Motorcycles will be back in action September 28-30 at the AAA Insurance NHRA Midwest Nationals at Gateway Motorsports Park in Madison, Ill.