CONCORD, NC (September 16, 2012) - Harley-Davidson® Screamin’ Eagle®/Vance & Hines rider Andrew Hines scored a holeshot win over his teammate, Ed Krawiec, in the final round of the O’Reilly Auto Parts NHRA Nationals at zMAX Dragway to earn his fifth event win of the season and keep the Harley-Davidson team undefeated in 11 events during 2012.


Facing each other in the final for the fourth time this season, Hines and Krawiec came to the line on Harley-Davidson® V-Rod® motorcycles finished in brilliant Hard Candy paint – purple for Krawiec and green for Hines – a throwback to the classic metal flake finish of the 1970s. They then staged a classic drag race. Krawiec had the faster Elapsed Time at 6.858 seconds, but Hines left the line 0.008-second sooner and won with a 6.862 ET, winning by 0.0042 second, or about a foot at the finish line. 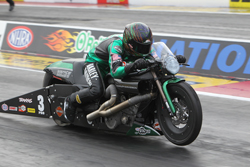 “I’ve lost to Ed three times in the finals this season, so I guess I’m due,” said Hines, who earned his 30th National event win, tying him with crew chief, older brother, and fellow three-time PSM World Champion, Matt, for class wins.


“Both Harley V-Rods were really evenly matched all weekend, so I knew it would take a good start to win the final, and it was a great race. Now that we are into the Countdown events, we came in here feeling like we had to defend our undefeated record in the regular season. Everything has reset and we need the points, so this was a great start for the team.”


Krawiec was the top seed when the points were reset among the top ten riders for the six-race Full Throttle Countdown to the Championship playoffs. But it was Hines who set the pace in qualifying, with a 6.851 ET that just nipped Krawiec’s 6.853-second run. That consistency would work for the team all weekend, despite a rain delay that postponed the start of Sunday eliminations for several hours.


“The track got cooler and tighter after the rain, which works for us,” said Krawiec. “We were putting down some excellent 60-foot times, which is essential for us to win. The V-Rods really loved the track conditions.”


Krawiec powered through eliminations with a win over ZLOOP Suzuki rider LE Tonglet in round one and automatic advancement in rounds two and three when both Sovereign/Star Buell rider Scott Pollacheck and Lucas Oil Buell rider Hector Arana Jr. fouled at the start. Krawiec’s 6.831-second ET in the third round was the quickest pass of the event.


Hines had a bye in the first round and a win in round two over Pirana Z Buell rider Shawn Gann. Hines advanced to the final after the Lucas Oil Buell of Hector Arana Sr. broke at the start.


Hines tightened the points race with his victory. Krawiec is still leading with 2215 points, but Hines is just 10 behind at 2205. Arana Jr. is in third place with 2151 points, followed by Arana Sr. with 2139 and Pollacheck with 2092 points.


The Pro Stock Motorcycles will be back in action Sept. 20-23 at the 27th annual AAA Texas NHRA Fall Nationals at the Texas Motorplex near Dallas, Texas.


The Pro Stock Motorcycles will be back in action Sept. 20-23 at the 27th annual AAA Texas NHRA Fall Nationals at the Texas Motorplex near Dallas, Texas.