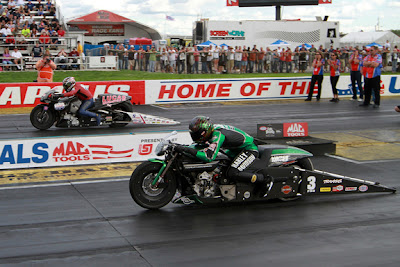 It took Harley-Davidson® Screamin’ Eagle®/Vance & Hines rider Andrew Hines 11 tries to get a win at the NHRA U.S. Nationals, and this year he even had to endure a week-long rain delay. But the sun was out at Lucas Oil Raceway Sunday and Hines rode his Harley-Davidson® V-Rod®  to a final-round win in Pro Stock Motorcycle to capture his first title at the prestigious event. The victory is also the first for the Harley-Davidson® Screamin’ Eagle® team at the U.S. Nationals, and keeps the team undefeated in 10 events in 2012.

“This is by far the best event win of my career,” said Hines, a three-time Pro Stock Motorcycle world champion who has now won four times this season and 29 times in his career. “Over the years we’ve had some bad luck and real disappointment here at Indy, but this season it just seems to be coming together for the Screamin’ Eagle team. And it’s extra-special to win here in our home town with our families and people from the shop here to watch.”


Undefeated in 10 events this season, the Harley-Davidson® Screamin’ Eagle® team is set to begin the NHRA six-race playoffs, the Full Throttle Countdown to the Championship, with its riders seeded first and second as series points are reset for the top-ten riders contending for the championship. With six wins on the season, Harley-Davidson® Screamin’ Eagle®/Vance & Hines rider Ed Krawiec, the defending NHRA Pro Stock Motorcycle champion, is the top seed in the Countdown. Hines is the second seed.


Hines was the top qualifier for the second time this season and the 32nd time in his career, but it took a 6.861-second Elapsed Time on the final qualifying run on Saturday to claim the spot after he was bumped first by his Harley-Davidson® Screamin’ Eagle®/Vance & Hines teammate, Ed Krawiec, and then by Lucas Oil Buell rider Hector Arana Sr. Arana ended up second at 6.881, with Krawiec third at 6.886 seconds.


Krawiec had wins over Suzuki rider Steve Johnson and Sovereign-Star Buell rider Scotty Pollacheck before losing to Arana Sr. in the semi-final round. Krawiec left the starting line 0.005-second early when the staging light in Arana’s lane flickered after the Harley rider was set to start.


“I think Arana was momentarily in and then out of staging, and I was left there with my bike revving and ready to go, and I think it crept forward just a little, which caused me to foul when I left the line,” said Krawiec. “A racing lesson learned from that one.”


Krawiec enters the NHRA Countdown playoffs with six wins in 2012. However, points for the top-ten riders reset for the Countdown, and the 106-point lead Krawiec enjoyed before Indy will shrink to just 30 points when racing resumes on September 14-16 at the O’Reilly Auto Parts NHRA Nationals presented by Super Start Batteries at zMAX Dragway near Charlotte, N.C. Ten points separate each of the ten riders in the Countdown, with Krawiec earning 20 bonus points for the top seed. Hines has the second seed.


“We will still be focused on round wins in the countdown, but now those bonus points earned in qualifying matter more than ever,” said Krawiec, “so we need to be on our game from the moment we unload the truck at these last six events.”