Krawiec Makes It Three In A Row With Brainerd Victory

Krawiec Makes It Three In A Row With Brainerd Victory
Monday, August 20, 2012 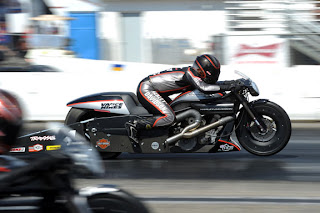 Harley-Davidson Screamin’ Eagle / Vance & Hines rider Ed Krawiec scored his third consecutive Pro Stock Motorcycle drag racing final-round victory and sixth of the season at the Lucas Oil NHRA Nationals at Brainerd International Raceway. Krawiec, the defending NHRA Pro Stock Motorcycle champion, defeated Hector Arana Jr. in the final when the Lucas Oil Buell rider fouled at the start. The win is also the ninth in a row in 2012 for the Harley-Davidson® Screamin’ Eagle®/Vance & Hines team, which remains undefeated for the season.
“I had a great Harley-Davidson® V-Rod®  to race all weekend, really strong off the line which is important for us,” said Krawiec. “It may not have been the fastest bike out there but it was very consistent and ran straight down the track. Consistency and steady racing have been winning for us all season.”
Krawiec qualified fourth at Brainerd with an Elapsed Time of 6.909 seconds. Harley-Davidson® Screamin’ Eagle®/Vance & Hines rider Andrew Hines qualified the team’s other V-Rod second at 6.887 seconds. Lucas Oil Buell rider Hector Arana Sr. led qualifying with an ET of 6.884 seconds.
In Sunday eliminations, Krawiec advanced in round one when Pirana Z Racing Buell rider Shawn Gann fouled at the start. Krawiec then defeated Geico Suzuki rider Karen Stoffer and Sovereign/Star Racing Buell rider John Hall in rounds two and three to advance to the final. Krawiec got the 17th win of his career when Arana Jr. left the starting line 0.02 seconds early.
Hines opened eliminations with wins over Küryakyn Buell rider Chip Ellis and Scott Pollacheck on a Sovereign/Star Racing Buell, but lost in the semi-final on a hole shot to Arana Jr., who won with a reaction time of 0.007 seconds and 6.914 ET to a 0.034/6.911 pass for Hines.
“I thought the tree was loose today, so it was hard to get a good start,” said Hines. “Hector Jr. took a stab at it and got lucky in that round, but I guess it didn’t work for him in the final.”
The Harley-Davidson® Screamin’ Eagle®/Vance & Hines team will now prepare for the prestigious NHRA U.S Nationals at Indianapolis on Labor Day weekend. The team has won 11 Pro Stock Motorcycle events in a row dating back to 2011, but neither Hines or Krawiec has ever won at Indy.
“For either of us to win at Indy would be simply awesome,” said Krawiec. “It’s a tough event because I think many racers try too hard to win there. But I think we are feeling really good right now and should be under no pressure.”
Krawiec now leads the NHRA Pro Stock Motorcycle division by 106 points, with 962 for the season. Hines is second with 856 points, followed by Arana Jr. with 760 and Arana Sr. with 630. Stoffer is fifth with 504 points.
The Pro Stock Motorcycles will be back in action Aug. 29 – Sept. 3 at the 58th annual Mac Tools U.S. Nationals at Lucas Oil Raceway in Indianapolis, Ind.

Email ThisBlogThis!Share to TwitterShare to FacebookShare to Pinterest
Labels: Krawiec Makes It Three In A Row With Brainerd Victory