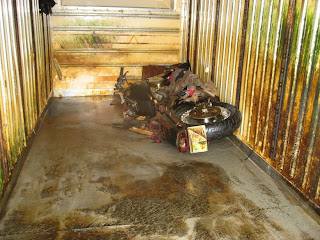 Harley-Davidson find the owner of the bike washed away in the Japanese tsunami last year
The owner of the Harley-Davidson washed up on a Canadian beach following the tsunami in Japan has been found.
A Japanese representative for the American manufacturer saw the news of the bike and tracked down Ikuo Yokoyama, a resident of the town of Yamamoto in the Miyagi Prefecture, where the bike was registered.
Yokoyama told a Japanese news station that the recovery of his motorcycle was miraculous and he wanted to thank the man who found it personally, rather than on TV.
He said that he had lost his home and three family members in the tsunami and was now living in temporary accommodation. He bought the Harley five years ago and was storing it in the container when the tsunami struck in March 2011.


He added that some of his fondest memories were touring Japan on the Harley and when asked if he had anything to say to his bike, the 29-year-old laughed and said: "Thanks for coming back buddy."
A Harley-Davidson spokesperson said they were hoping to return the bike to Yokoyama fully restored