Triumph’s 110th Anniversary Model?!
No, it's not the Triumph Bonneville that's 110 years old, but later this year Triumph is going to be celebrating its 110th anniversary and our insiders reveal that there is certain to be a special version of the Bonnie to mark the occasion.
What do we know about it? Well, it's based on the Bonneville T100. In fact, its specifications are identical to the stock T100 and the T100-based Steve McQueen Edition. How do we know? Because it's listed alongside the rest of the Bonneville range in the owner's handbook... 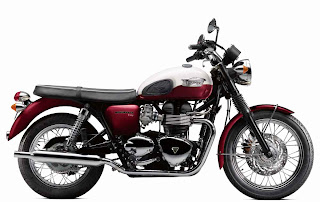 What we don't know is what differentiates it from the other T100 models. The Steve McQueen has its green paint and blacked-out chrome, but we're guessing the anniversary version will get something a bit brighter.

No news yet on when the Anniversary will be officially announced, but since this is Triumph's anniversary year, it can't be too distant.