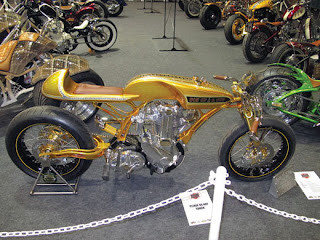 2011 winner Larry Houghton went on to take second place at the World Championship with his bike 'Son of a Gun'
London's legendary Alexandra Palace ('Ally Pally') will again be hosting the London-based round of AMD's World Championship of Custom Bike Building affiliate program on February 25th and 26th, 2012.

This is the third year of the event and sees the show footprint extended to include the classic motorcycle market.
This year's Best in Show winner will again win bike freight expenses to compete at the World Championship at the Sturgis Motorcycle Rally in August and will have a tough act to follow as the 2011 winner, Larry Houghton's much admired "Son of a Gun" (a 1951 BSA 500 db32 Goldstar) went on to score second place in August 2011 - the best ever World Championship result for a British custom bike builder.
Sponsored by British custom magazine Back Street Heroes, the custom show at 'Ally Pally' is one of two events being operated in the UK this year by show organizer Andrew Greenwood. March 17th and 18th 2012 will see his first annual Manchester bike show staged at the EventCity venue.
LONDON INTERNATIONAL CLASSIC AND CUSTOM SHOW