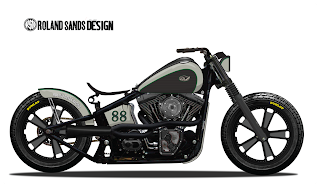 RSD “Finished rendering of the bike. We're a little bit behind, but next is paint and our 2012 photo shoot.” 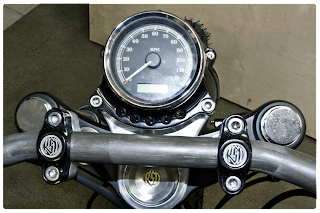 RSD opted out of the number plate as they found a solution using a RSD Sporty gauge cluster and a Sporty headlight which works perfectly with the Blackline gauge and puts the headlight in a nice location. Using the RSD low risers and a new moto bend welded bar allows a clear view of the gauge and a dirt track worth bar position. 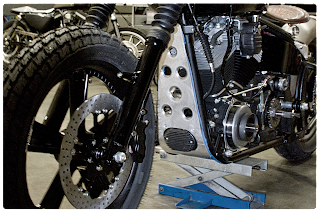 Being that she will spend some time in dirt RSD thought it only right to put some fork boots on her legs as well as building a skid plate in front of the motor that rolls under the frame rails. 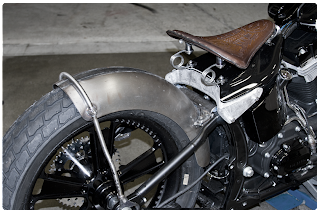 “Rear fender and fender mount finished. Got our first set of Black Ops Judges 19X3 front and rear for the Blackline. The Goodyears fit perfectly and the bike now has a very aggressive dirt worthy stance. We’ll be wrapping the seat and tank cover in aged black leather with some tooling details by our friend Mauricio from Azteka. Design to come soon.” 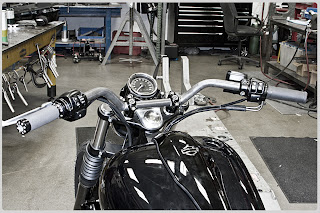 “Handlebars. This was probably the most controversial part of the Blackline. You either hated it or you hated it. They just looked a little goofy and the worst part is the bars are impossible to change out without fabrication. We’re working on changing that. We’ve fabricated a clean set of dirt track pullback bars for plenty of control when pitching her sideways.” 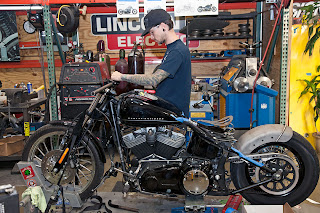 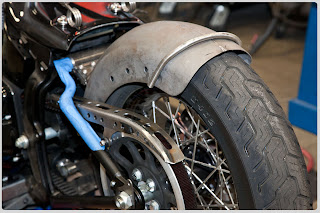 A simplified and narrowed up rear end was the chief priority so RSD removed the very heavy rear fender and struts as well as the seat. “We fabricated a new narrowed fender that mounts to the swingarm and hugs the tire just right. We’re thinking we might offer the Narrowed rear fender kit for Softails in the future.” 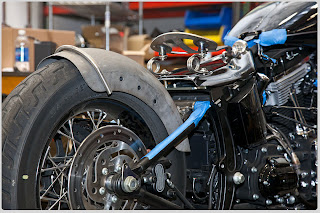 With the rear fender rigid mounted a new solo spring seat was next. They used the RSD spring seat kit which bolted up easily and gave an instant vintage feel with no fabrication.
The Harley-Davidson Blackline Softail was aimed at the younger customer looking for something raw and to the point. H-D tried valiantly, but as with many other models, once you squeeze something through a committee and budgets you end up with what you end up with. In the case of the Blackline, it’s a blacked out, narrow rear tire Softail that has yet to inspire the mass majority of chopper geaks to pick up a torch. But what it lacks in punch it makes up for in possibility. We love the narrow rear tire and simplicity of the base model Blackline. All she needs is a little imagination and some elbow grease to get something that is going to be much lighter than the stock machine. 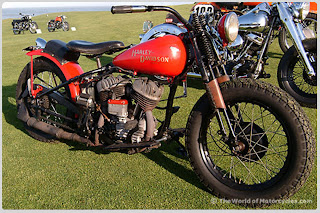 RSD is using the WR flat head as inspiration for this project. Light weight and trimmed up for a little dirttracking, or maybe a Daytona Beach sand race.
More info www.rolandsands.com
Posted by Onno "Berserk" Wieringa www.madnessphotography.nl at 11:40