The new Stealth air cleaner from S&S Cycle is described by the company as being one of the cornerstones of its four-step tuning program for 2012.
Talking about the design and development of the Stealth, Scott Sjovall of S&S Cycle explained: "We called it the Stealth air cleaner because customers can choose to run their stock air cleaner covers over the filter/backplate assembly for a 'sleeper' look, or they can choose to run one of our new covers, which includes the first update of our famous teardrop shape since the release of the E & G carbs over 20 years ago. 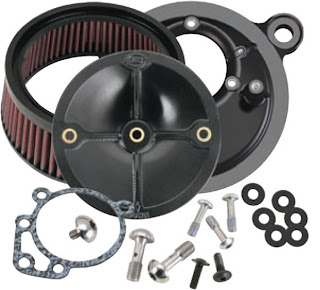 "The Stealth air cleaner is priced very competitively compared to its competitors, and offers as much or more performance with the S&S quality and ease of assembly. In fact, the whole kit was designed around simplicity, ease of installation, ease of maintenance and, of course, performance. It is the only air cleaner of its kind to incorporate the 'stinger' to direct and smooth airflow into the engine that has been an integral part of our teardrop air cleaner covers since we started selling them with the legendary L carbs in the '60s."
The air cleaner cover Scott mentions was designed as an update of the classic S&S teardrop with the advantage of offering increased air flow. However, it is not the only cover option for the Stealth, as S&S is also offering several minimalistic billet covers in a choice of black or chrome that leave the air filter element and back plate exposed for a more industrial look. One of the covers, the 'Muscle' uses miniature hood pins similar to those that held the hoods down on the muscle cars of the late Sixties and early Seventies, hence the design's name.
Sjovall had this to say on the benefits of the new air cleaner's design: "We designed the backplate to be a bolt-on part with minimal fasteners and assembly required. No shims to worry about, no breather lines to hassle with and internal hardware that is locked in place so that it can't come loose and be ingested into the motor. Because we designed the stinger section of the air filter to be a separate piece from the element, it makes the filter replacement much more affordable when the need comes to change it. The element is washable, though, and should never need to be replaced unless it is damaged, or the owner just chooses to change it."
The kits are available for almost every Big Twin and Sportster application from '91 XL and '93 Big Twins to the 2012 models. The air cleaner kits and the covers are sold separately or as a kit, allowing dealers to decide how they want to stock them and to make the product line more flexible.