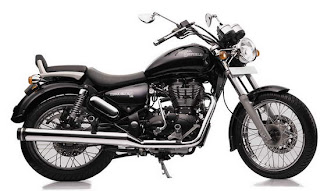 Royal Enfield , world's oldest motorcycle manufacturer with the same model, has unveiled a ‘new’ motorcycle model. Called the Thunderbird 500 (there is already a popular Thunderbird 350), it's a course change for the English-then-Indian manufacturer. Their traditional model, the Bullet has been unchanged for decades. Now, they have made a more modern look-&-feel, with updated technology.
The Thunderbird is a touring motorcycle, styled like a cruiser. But you'll not find much chrome on this motorcycle, even the engine is black.  The color choices for the new motorcycle are black, black and black (in fact, there are three shades of black). The pillion seat can be removed, allowing you to carry luggage. There are even hooks for bungee cords. 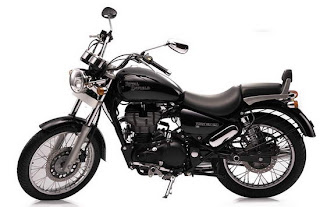 The dashboard is a combination of digital and analog, with an analog clock in the middle.
The 500cc, 27 HP  engine, and a torque of 41.3 Nm is not going to be competing with Boss Hoss or Triumph Rocket III cruisers, but should provide for a nice and easy ride through the countryside. You'll be able to go quite far, since the 500cc engine is economical, and you've got a 20 liter fuel tank.

No prices or availability disclosed as off yet.
Royal Enfield plan to launch a Cafe Racer by next year.
Source: Royal Enfield
Posted by Onno "Berserk" Wieringa www.madnessphotography.nl at 15:05