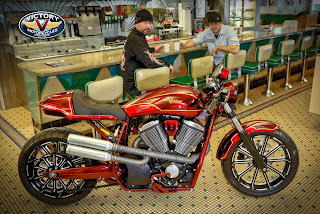 Alongside the official unveiling of the new 2013 Victory Judge at the New York IMS came the unwrapping of a custom Café racer version of Victory’s new cruiser by Zach Ness.
The grandson of Arlen Ness and son of Cory decided to give the Judge a café racer makeover, completely re-doing the Judge’s rear including getting rid of the number plate area below the seat that seems to be hit-or-miss with critics. 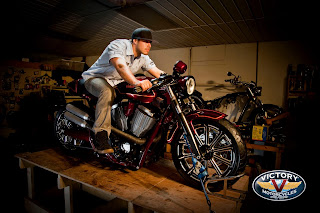 Ness is still tinkering with his custom Judge, and he says he intends to ride it into Daytona Bike Week. In the meantime, Victory released a video of Ness going over the work he put into the custom Ness Café Victory Judge.
The “Ness Café” one-off features a completely new rear frame, handmade exhaust, LED tail light, Ness wheels and grips, Öhlins TTX rear shock and an extra three or four inches of ground clearance. The stock crankshaft was also replaced by Lloydz Motorworkz with a custom crank that weighs ten pounds lighter. 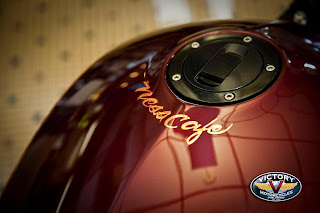